The Football Stud and Soles 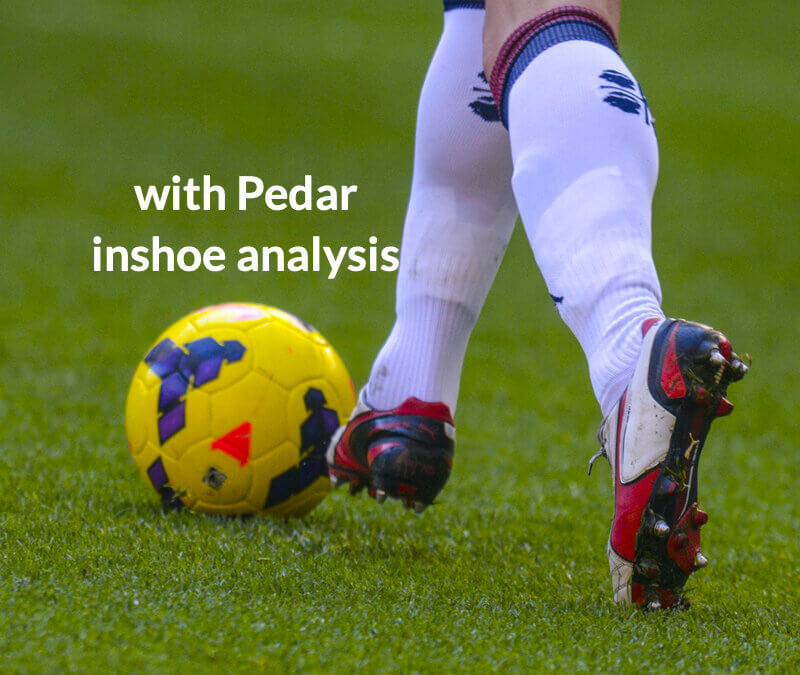 Podiatrist Trevor Prior agreed to write about the football stud and soles for ConsultingFootPain. Unlike him, I am not a passionate football enthusiast, but even I could not fail to be drawn in by the excitement and tension at this year’s Euro football matches where England achieved a finalist’s position. Being passionate about foot problems I could not help but take in those injuries, that resulted in pain that only the audience could imagine. One can see why players are reliant on shin pads, the legs starting to look like the puttees used by soldiers in the Great War 1914-1918. Even these could not stop what appeared as fouls. For those keen on sports podiatry who better to turn to than Trevor Prior. It turned out Trevor’s father, Harold Prior, was the chiropodist for Arsenal. They offered him two tickets and he turned them down because he didn’t like football, but he drank out of the FA Cup. Trevor of course was passionate and was the team podiatrist for West Ham for 10 years and continues to work with a number of the premiership and professional football clubs.  In this article, he educates us in the design and different studs used in football boots, although of course, this is not the only sport where soles have been adapted for better grip on the turf. (Editor)

Following the recent success of the England football team at the euros and the hopes for the GB ladies team at the Olympics, football possibly has an even higher profile than normal. With this in mind, this article sheds some light on the nature of injuries that can be caused by studs. 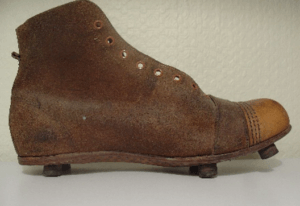 Historically, football boots were made of leather, initially without studs but subsequently also leather studs (shown). However, these were heavy, particularly when wet and were superseded by more lightweight versions which traditionally had two types of stud configuration, metal and moulded. However, professional footballers often tried to get a balance between these with a hybrid adaptation and subsequently, the ‘blade’ stud was introduced:

Metal screw-in studs
Traditionally with two at the back and four at the forefoot, these studs could be removed to either replace or change the length according to the pitch conditions. However, these can cause high-pressure points, particularly on harder pitches and predispose to discomfort and pathology.

To offset the discomfort of metal studs, moulded studs were part of the stud plate and therefore a softer material, generally shorter in length with greater numbers across the stud plate, designed to reduce the high-pressure areas.  Whilst this made the studs more forgiving on harder surfaces, they also had less grip and could result in slipping.

Hybrid adapted studs
In an attempt to overcome the issues with both types of aforementioned studs, some professional footballers would have the kit to adapt the boots. They would take a moulded stud plate, cut off a small selection of studs, drill a hole in the stud plate and replace it with a metal stud.

Blades
In order to try and meet the demand of the hybrid ‘home-made’ boot, blades (Bhutani et al) were introduced. Again, these were effectively moulded into the stud plate and thus a softer material than metal, but now these were wider and of varying configuration and numbers to try and optimise grip. Clearly, there are pros and cons to each stud configuration and the shape and number of studs are constantly changing. When considering the types of injury, these can be split into two categories, injury to 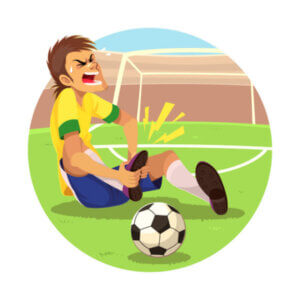 Injuries to another player

Skin damage
If the stud ‘scrapes’ along the skin then this can leave a long laceration, whereas direct contact could cause a puncture wound or bruise. Although a different sport, it was a regular feature before we played rugby for the referee to check soles to ensure the metal studs had not become sharp – if it was deemed the case, the stud had to be replaced or removed. The introduction of blades which were often wider in nature seemed to increase the size of skin wounds and was the subject of a letter to the BJSM in 2004 (Hall & Riou).

Joint and soft tissue injury
A glancing blow from a stud can be enough to result in a tendon injury, particularly if it catches a superficial tendon such as the Achilles. In addition, if direct contact is made with a player, the high pressure that will result beneath a stud can easily result in joint damage which may go on to cause arthritic changes. This is common at the first MTPJ. However, there is also the risk of more serious joint pathology the potential of which is demonstrated by the tackle on Jack Grealish in the Euro final (2021).

Nail pathology
Clearly, the direct contact of a stud on a toenail can commonly cause a subungual haematoma with eventual loss of the nail which may result in later deformity.

Fracture
Similar to above, the focal pressure of a stud can cause a fracture, particularly over the metatarsals where the 5thmetatarsal is more at risk. This is in part due to the reduced size and support/protection from a lightweight boot. In addition, as players like to wear their boots 1-2 sizes smaller, in order to feel the ball, this results in less support beneath the metatarsal.

A case of stud damage 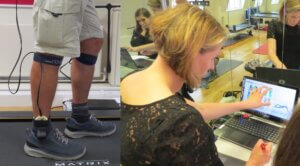 Working with the Pedar system allows analysis of foot pressures and the distribution of load to be assessed across the foot whilst walking.  As part of clinical assessment, patients can be fitted with an insole connected to a computer and examined whilst on a treadmill. In the picture above, my consultant colleague, podiatrist, Suzy Speirs is shown assessing the editor’s foot (David) when he visited my practice in 2016. A pack is attached to his belt with connecting leads to the insole which has sensors that pick up the pressure engaged between the foot and shoe as it contacts the ground. A number of colour pictures are created, some in 3D and graphs showing vertical forces.

If you are not familiar with the Pedar inshoe pressure system the download link offers a visual story of the loads encountered by a football boot versus running shoe. And, in the second set of pictures, a rugby boot stud caused a metatarsal fracture. Download the link to view the pictures illustrating the pedobarographic distribution, vertical loads and 3-D representation. 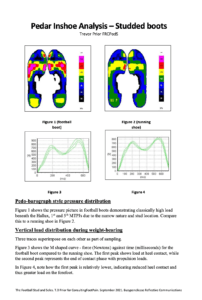 Ligament rupture.
Perhaps the most commonly accepted injury is a non-contact anterior cruciate ligament (ACL) rupture. If a player lands on the foot with a rotational load through the lower limb and the studs get caught in the ground, the force of the rotation can be sufficient to cause rupture of the ACL. However, this can also happen at other ligaments such as the anterior talo-fibular ligament (ATFL) if the mechanism of injury is sufficient to load the ligament. As early as 1999, Lambson et al identified how the cleat (American term for stud) design increases the torque on the lower limb and predisposes to ACL injury in American football.

MTPJ Pathology
The flat nature, reduced size and stud location (see pics) all increase the load beneath the forefoot and in particular the 1st and 5th MTPJs. This can lead to sesamoid or joint pathology. Some boots have a central forefoot stud and, if this is located directly over a central metatarsal head, can result in pathology.

Fracture
If there is high focal pressure over a metatarsal head due to the underlying stud, this can be sufficient to result in a stress fracture. This is more common with the 5th metatarsal, primarily as it is smaller, and has less support due to a narrow stud plate and can be subject to high loads. In some boots, there is a stud located in the middle of the  5thmetatarsal shaft. If the boot is very flexible, this can cause a high-pressure point.

Whilst a great deal of technology goes into stud plate design, it is clear that there is potential injury to both the footballer and their opponents. Direct trauma is inevitable and will always occur. However, the non-direct injury that players sustain can be overcome with some thought as to the predisposing factors. A boot that is worn tight for the feel (i.e. too small) will have an inappropriate size, afford less protection and the studs will not be in the position for which they were designed. This runs the risk of abnormal load over a joint/metatarsal predisposing to injury. When we consider that the metatarsal parabola varies greatly between individuals, the ultimate boot will have stud positioning optimised to the individual and this is possible with current technology. As manufacturing costs reduce, it will be interesting to see if these types of injuries reduce.

Trevor is a Consultant Podiatric Surgeon and Fellow of the Royal College of Podiatry and a Senior Clinical Lecturer, Queen Mary, University of London and Senior Clinical Fellow, University of East London. You can find more about him at this site or contact him directly through www.premierpodiatry.com  [020 8502 1777]. Facebook: PremierPodiatryLimited & Twitter: @Trevor_PremPod

ConsultingFootPain is keen to publish any article on footwear and how it interacts with the foot and lower limb. Why not write an article and get a free book and advertise your service for free (conditions apply).

While the reader may find plenty of articles covering studs on a Google search, a majority have adverts that can spoil the pleasure of reading. 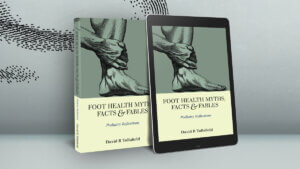 Thanks for reading ‘The Football Stud’ by Trevor Prior for ConsultingFootPain.