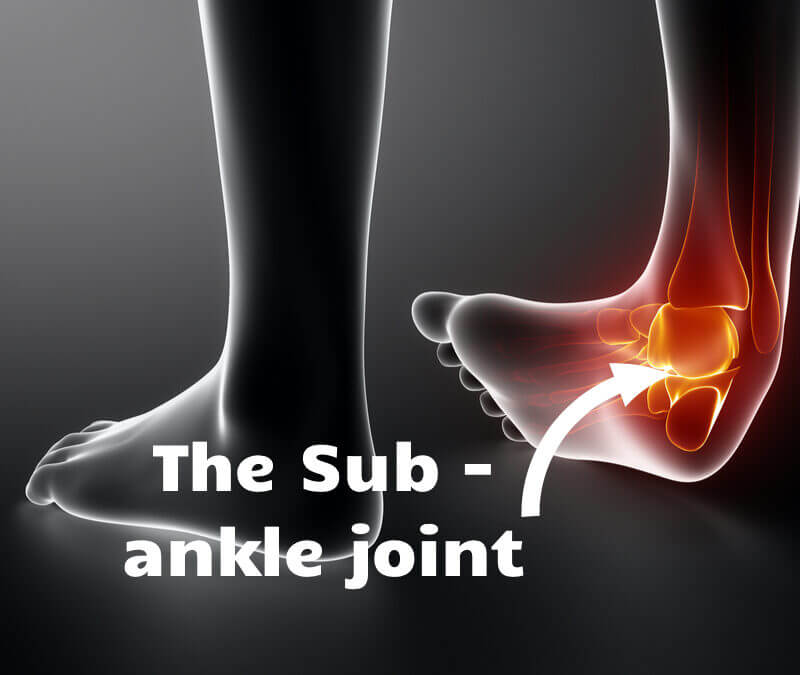 The Subtalar Joint is the Second Ankle Joint

While we know many things about ankles, the average person does not known about the second ankle joint. The ankle plays a critical role in walking and is connected to the leg bone by the all important TALUS. In this article I shall talk about the second ankle joint and its function. You will see why the ankle is such a feat of mechanics! The obvious reason for selecting footwear that protects the ankle in general is to stop foot and ankle sprains. Sprains will be the subject of the one of my next articles. Having discussed the true ankle joint, we must now consider the importance of the second ankle joint. This is no less important than the first. Unlike the true ankle joint, the subtalar joint or STJ is more difficult to understand. Some of the links used contain more information than you might not want or need so just use the pictures to help you understand the principles.

A hip and knee joint appear as single joints for the purpose of this discussion. Click the highlights showing movements in 3D. Both videos are under a minute long.

One thing we learn is that single joints can have movement limited to one dimension. In the case of the hip and shoulder joint, both have wide ranges of movement. Indeed the ankle joint is one joint and like the knee has movement predominantly in one dimension, extension and flexion. However there is a small amount of movement in other dimensions. The clinician who studies the musculoskeletal system must understand how much movement occurs in each dimension and which dimension yields the most important movement. Dimensions are also know as PLANES of MOTION (see diagram or click the link in blue). The First ankle joint: The ankle movements are extension and flexion. Upwards is called dorsiflexion and downwards plantar flexion. It moves in the sagital plane. This short video shows the movements

The ankle bone, called the talus is grasped between the long leg bones.  It is useful to read my article on the ankle joint first which explains the importance of the ankle bone and talus.

The top surface of the ankle bone is curved (not shown), but the undersurface is much more complex (illustrated) and is called the subtalar joint. This is a multi-joint or multi-faceted joint where the word facet means a connecting surface. (click here for more on the subtalar joint – STJ). The second ankle joint: The subtalar joint principally moves in the frontal plane but does use a little movement in the sagittal and transverse plane. The first ankle joint offers most sagittal plane movement i.e dorsiflexion and plantar flexion.

The left diagram shows the under surface of the talus separated by a channel. The right diagram is the top surface of the heel bone. There are 2 facets on the left (talus) and 3 facets on the right (heel bone or calcaneus). This doesn’t make sense as there should be three on each. NO. In fact the forward facet on the talus shares 2 facets on the calcaneus. Looking at these surfaces it is now difficult to figure out what movement is going to occur. The true ankle is easy so why don’t all joints appear as simple.

The following depiction of movement for the sub-talar joint is useful illustrated by  video on movement in 3D with computerised illustrations.

The difference between the true ankle joint and the subtalar joint comes down to different movements. The top part of the ankle provides flexion (plantar flexion) and extension (dorsiflexion). The bottom part, or the subtalar joint, provides leaning movements. These movements are called inversion and eversion. In this video – anatomical movement demonstrated using a skeletal foot model  the two movement is demonstrated.

Why is the ankle joint open to sprains? The subtalar joint is exposed especially in uneven ground but also functions well when stable.

The hip and shoulder joint have such large movements called circumduction because they have a big round ball like joint which is stable. The ball fits a deep socket making it a stronger fit and it is supported by powerful ligaments and strong muscles.

The second ankle joint allows the true ankle to retain the stability of the big joints. Because the ankle cannot do everything like a hip and knee, because of its design, having a second ankle joint helps. To work properly the foot must move in three directions or we would limp. To achieve this the ankle is made up of three joints. This means the second ankle (STJ) must make up inversion and eversion, tilting the ankle sideways. To complicate matters it has those smaller movements as well. This makes adaptation of the foot contacting uneven ground safer and better.

The all-round four wheel drive of the body As we walk up and down a hill as shown in the previous picture of the walker, the ankle and foot have to adapt the changing shape of the ground. The subtalar joint has more inversion than eversion. The movement is designed so that the ankle and foot can tip over when the ground is uneven. To prevent too much tipping we have ligaments that stop the ankle going over. The only problem is that these ligaments are much weaker and thinner on the outside of the ankle and can be damaged. Generally as long as the true ankle is not plantar flexed with maximum inversion, we can cope pretty well. Sensors in the ligaments act as righting reflexes so we quickly adjust. If we lose these reflexes the second ankle joint can tip over tearing the ligaments and then we have pain and swelling.

To overcome the problem of ankle sprains, wearing higher walking boots can help. Not everyone can wear high boots and as shown in the picture, the woman prefers a stout walking shoe. Foot orthotics can help stabilise the foot if the ankle keeps turning over. The other sensible approach to walking is to use adjustable walking poles.

The subtalar joint is designed to have a higher inversion movement than eversion. As Dr Kirby describes in his 1 1/2 minute video demonstration (above), eversion is limited because of the design of the joint shape (facets).

What have we learned?

The ankle joint has three joints. Each joint combines to help the other produce good 3D movement between leg and foot. The foot must content with different terrain as seen in a four wheel vehicle.

Thanks for reading “The second Ankle joint” by David R Tollafield