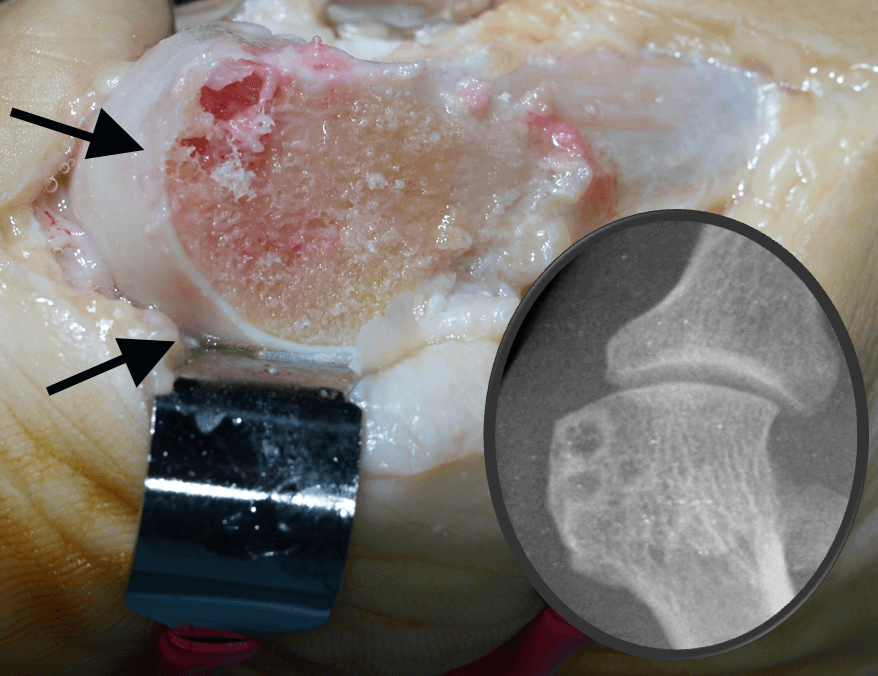 Cartilage damage in hallux valgus is a common finding. Mapping might offer some predictions regarding long-term outcomes of first toe pathology, or so Thomas Roukis (2005), a U.S podiatric surgeon, suggests. CFP updates the original article from 2020 with some new material that might allow us to be more objective as podiatric practitioners.

The following article has been produced following a lecture at the NEC given by the author in May 2022. There is a downloadable paper and clinician desk guide available. Click on NEC

It is our view or certainly one held by many, that if we damage our joint cartilage, we are doomed. After 32 years as a (podiatric) foot surgeon, I realised two things. First, most patients recovered even with a bit of stiffness after surgery, and secondly, those that did less well were few.

Another factor that comes into play is that data is skewed toward surgical consultations. Referrals arise in the main from medical practitioners with surgical discussion in mind. Pain, discomfort and difficulties with walking and wearing shoes are among the 60% of this first toe condition (PASCOM – Tollafield 2019).

Using RICE, the mnemonic for rest, ice, compression and elevation, might appear ideal, but this is not always practical for patients who do not have acute pain, except for gout or turf toe injury. But what if the pain is associated with a chronic condition? RICE can still be applied but managing pressure and stabilising the joint forms the key management strategy. Metatarsalgia can be arrested depending upon patient footwear considerations with orthoses and insole prescriptions.

What are the objectives of treatment? 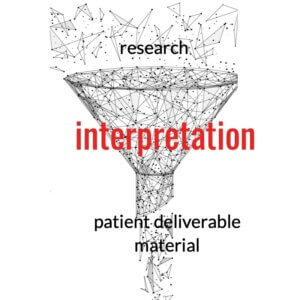 There is probably little doubt that surgical papers predominantly refer to cartilage damage in passing without meaningful conclusions. One should ask, does it matter? The podiatrist needs to know how to use the information reliably to inform patients of prognosis.  The information we use must have a strong evidence base yet be interpreted favourably for the less technical. Practice guidelines, based on work by Natalie Joseph-Williams and others, have incorporated new attitudes about patients being able to share their thoughts so they can take part in decision making. They can only do this if they have information, understand the content and be able to interpret this to ask questions to which they can contribute. Now that takes time and preparedness by the clinician to deliver and the patient to read.

The clinician must use research, interpret the relevant parts and filter out jargonise. This takes time and dedication, as well as having the skill. Universities are responsible for showing career degree students how to undertake all these basic skills and that was one reason why podiatry migrated from a diploma to a degree course.

What intervention is best? 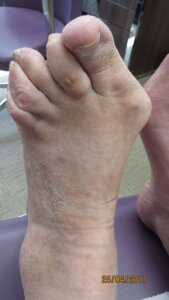 Protecting soft tissue should be paramount as in footwear, local padding or devices suited to protecting the first toe prominence. Splints and taping all have a part to play but no one has studied the effect on hallux valgus degeneration emanating from erosions within the conservative arena. It is only once patients present for surgery that the evidence becomes observable. Early splinting is recommended for painful joints and some outlets sell such devices to use as a day or night splint. Correction of the deformity is not possible, but the painful HV joint can be helped considerably. Plaas undertook research and found positive benefits from a commercially available design but more expensive than simple forms. The illustrated example allows adjustment and walking. When considering the paucity of information on conservative care, the best insight into the effect of treatment comes from Grice et al. (2017). This paper helps identify the timeline concept by recording the limitations of steroid injections.

The problem with Grice’s steroid injection study is that it is specific for hallux rigidus (HR), rather than hallux valgus. In his study of 365 injections for ankles, plantar fascia, neuroma and synovitis, HR drops from 92% down to 9% over one year, meaning the benefit is poor. However, synovitis in lesser mtpj’s delivered 80% effectiveness initially and remained at 31% at the end of the year; a 90% compared to 61% reduction in effectiveness. Soft tissue does not do better. plantar fasciitis dropped by 93% versus 64% for a neuroma.

Bock et al. (2004) looked at the reliability of x-rays against two methods of recognised evaluation. The Kellgren-Lawrence scale 1-4 shows different levels of deterioration by radiographic interpretation, and secondly, the International Cartilage Repair Society scale (ICRS; 1998). In an ideal world, there should be a reasonable comparison, but 54% (144) underestimated the presence of degeneration and 11% (29) overestimated the presence of degenerative changes. Around 35% (92) agreed with the intra-operative scale using the ICRS. Table 2 shows the Kellgren-Lawrence scale for radiographic interpretation of damage in hallux valgus.

Magnetic Resonance Imaging (MRI) is still in its early stages of use for hallux valgus. This is clearly due to cost and access even in strong health economies. The MRI however is the ‘go-to tool’ in orthopaedics (Choi et al., 2018). Of the MRI, they state, ‘The most common findings observed in hallux valgus were hypertrophic medial eminence (95%), sesamoid proliferation (90%), and adventitial bursitis (90%). They also found that osteophytes (77%), subchondral cysts, and bone marrow edema were commonly found with hallux rigidus.’

The use of intra-articular investigation or arthroscopy is probably still in its infancy compared to knees and ankles. Fibre-optic cameras are now small enough to insert into the mtpj, as recorded by Lui (2008) cited by Villas (2012). Synovectomy produced a 90% good outcome in a study with 121 patients. 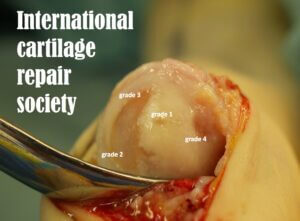 Roukis et al. (2005) provided the first mapping exercise on live patients rather than cadaveric studies. Such studies may have predominated previous work on cartilage defects (Scranton & Rutowski,1980), where sesamoids were blamed for erosive changes. The top layer of cartilage, the pearly white material (lamina splendens), measures in microns, while the cartilage thickness for the first toe joint is less than 1mm. The chondrocyte content is low (0.4-2%), relying on the specialised effect of collagen fibres, proteoglycans and water. The deeper two zones do not play an immediate part in dealing with stress. 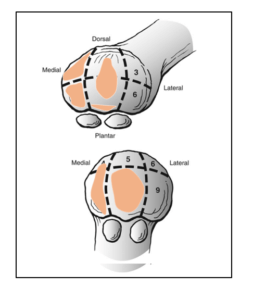 Common areas of erosions across all papers. Adapted by the author from Jastifer et al. (2014)

Any replacement repairs with fibro-cartilage, Walsh et al. (2007) rather than new cartilage.  Adaption to cartilage and bone is seen around the dorsal and medial aspects of the metatarsal head within the first mtpj anatomy. Roukis et al. (2005) suggested erosive cases existed in 100% over the age of 50 in a study of 120 patients affecting one or other part of the mtpj. Jastifer et al. (2014) found that 91% of his patient cohort had osteochondral lesions in 56 consecutive feet. The numbers may appear low compared to a study by Bock et al. (2004), who reported 73% of their 196 patients with erosions. Jastifer used the ICRS scale while Roukis did not. Jastifer followed his patients for 2 years and measured the damage across the cartilage surfaces for sesamoids and metatarsals.

Are we any better informed?

Bock (2004) looked at the comparison between radiology and cartilage damage with the backdrop of x-rays. Only 35% of x-ray interpretations agreed with the intra-operative findings along the lines of ICRS; 54% were overestimated, and 11% were underestimated. This means that X-rays are not that reliable for evaluating arthrosis in hallux valgus, more so for HR.

Roukis considered a 13 zone map while Jastifer only used 9 zones, but both concluded common zones were affected. Roukis used measurable parameters such as angles between common joints and bone relationships, hoping to provide indications of which presentation might afford a greater predisposition to erosion but felt that such angles did not predict the incidence of likely lesions. Jastifer (2014) does not wholly agree with Roukis on the angles of deformity and its relationship with erosions.

Although 6 years old, Jastifer’s paper (2014) is the latest in a small series on the first MTP joint erosions. Their conclusion, however, suggests that the grade of the cartilage lesion and extent of lesions do not have a strong correlation with the severity of the deformity. And yet we know that as the deformity increases, the number of lesions found does increase. Jastifer found similar findings for the most frequent locations. The medial inferior and superior zones held the greatest frequency, but this was not universally found among all authors.

Medial wear was considered due to compression forces, rotation of the metatarsal head as the deformity increases and the effects of medial ligament strain. As the deformity leads to subluxation, could the loss of the integral lubrication system lead to desiccation and easier tangential wear? Disuse atrophy is widely recognised alongside the medial sagittal groove.

Subchondral bone cysts (see the main article picture) arise when the surface thins and the synovial fluid is forced into the Haversian canal with bone. When removed, the cysts form jelly-like substances and exhibit a lining within the cavity. The cysts have no bearing on patient treatment outcomes, although large cysts could lead to fractures. X-rays show an area of dark change or lucency where cysts are apparent. 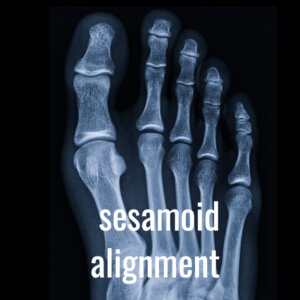 Grading 1-7 relates to the position of the tibial sesamoid. Positions 2-3 are shown.

The illustration of an x-ray taken standing shows that at positions 2-3, the tibial sesamoid is close to abutting the crista even though there is a good joint space. The alignment appears sound but the x-ray does not account for any frontal plane rotation. 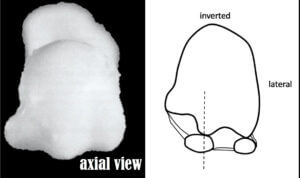 relationship of sesamoids and metatarsal

Sesamoid displacement is easy to assess from x-rays, but the correlation with actual erosive changes is less easy. Males showed more erosive zones when a demarcating map drew 13 different locations, Roukis. As the age of the participants increased, the number of zones involved increased as well as the incidence of a lesion. Fewer erosions were seen when the first toe in relation to the second digit was shorter, Roukis et al. (2005). Medial erosions predominated, while the lateral side was spared more often.

The proximal articular set angle, or PASA, was associated with the inferior central zone erosions. This is an angle of the head of the cartilage cap upon the first metatarsal. It has been considered to have been adapted in shape and position over time as well as being part of development. Breslauer et al. 2001 used cadaveric studies and applied these to patients to show that the metatarsal rotated to increase sesamoid impingement against the crista.

Getting closer to the answer?

Jastifer makes an important statement; ‘Patients should be counselled about the prevalence of these lesions when discussing expectations from surgery but no less the role of the sesamoid articulations.’

The Tibial Sesamoid Joint plays a part in sesamoid pain and surgical outcome. Jastifer followed patients for 24 months and those with 21 degrees of hallux valgus returned a good outcome in 83% of cases. Those under 21 degrees were 100% satisfied. This seems surprising when Jastifer found in 51 of 56 feet a mean score for 50mm2 surface area damage using callipers. Grades 2 and 3 for depth prevailed across most studies. And yet the general view is that surface area and depth of lesions do not contribute to the outcome after treatment. Level 4 means the bone and vascular tissue are involved and create haemarthrosis where fibrin infiltrates the synovial fluid and fibrils form a web across the joint. This limits movement and can tear at the remaining cartilage tangential or superficial cartilage zone.

If the synovium becomes inflamed, it cannot remove inflammatory debris, and if blocked by a fibro-cartilage or bony osteophyte, then synovial lubrication fails. A breakdown in the mechanism associated with the extracellular fluid transport mechanism and surface lubrication that limits friction sets up the process for further damage.

The critical points that manifest in pain with Hallux valgus

At least two of the above must combine to affect the declining health of a joint and cause irreversible joint changes in mechanical and chemical terms.

Other articles available from ConsultingFootPain 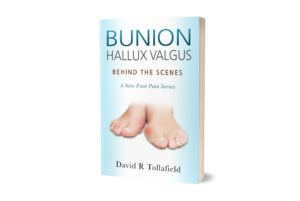