Blisters and Pathology in the foot 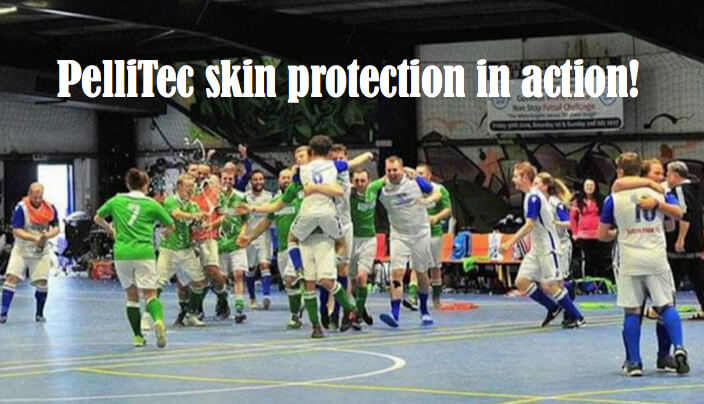 Blister prevention and pathology, meaning the problems that blisters cause in the main aim. My recent article on blisters can be found on this site Pain and Prevention of Blisters.

Blisters occur in vigorously active populations and result from frictional forces that mechanically separate epidermal cells at level of the stratum spinosum. Hydrostatic pressure causes the area of the separation to fill with a fluid that is similar in composition to plasma but has a lower protein level. About 6 hours after formation of the blister, cells in the blister base begin to take amino acids and nucleosides; at 24 hours, there is high mitotic activity in the basal cells; at 48 and 120 hours, new stratum granulosum and stratum corneum, respectively, can be seen.

Wearing foot socks composed of acrylic results in fewer foot blisters in runners. A thin polyester sock, combined with a thick wool or polypropylene sock that maintains its bulk when exposed to sweat and compression reduces blister incidence in Marine recruits. Recent exposure of the skin to repeated low intensity frictional force results in a number of adaptations including cellular proliferation and epidermal thickening, which may reduce the likelihood of blisters.

More well-designed studies are necessary to determine which prevention strategies actually decrease blister probability. Clinical experience suggests draining intact blisters and maintaining the blister roof results in the least patient discomfort and may reduce the possibility of secondary infection. Treating de-roofed blisters with hydrocolloid dressings provides pain relief and may allow patients to continue physical activity if necessary. Blisters tend to be ignored or de-emphasised but account for a large number of medical problems and when present, can result in altered gait patterns which go on to result in or exacerbate other more proximal musculoskeletal injuries. What is more concerning again is that blisters become open wounds and as such are susceptible to infections (Berkley et al 1989). This will have a debilitating effect on the movement which is becoming increasingly stressed in all members of society. From the sedentary office worker to the military personnel involved in operations. A case series reported the death of a soldier and hospitalisations due to Staph aureus infections in association with blisters (Brennan et al 2002)

Friction blisters can have a negative effect on an individual’s ability to perform his or her sport or duties. They can occur frequently during prolonged exercise and may often result in the cessation of exercise. In a recent study, 69% of soldiers participating in a 20-km road march were found to have blisters, 10% of whom required medical intervention. Blistering of the feet is one of the most common injuries sustained by runners while training and racing. Although most blisters are minor and can be treated conservatively, others can lead to intense pain, cellulitis, and even sepsis. The best way to treat friction blisters is to prevent them. However, if they do occur, timely and effective treatment will help prevent the complications that can impede athletic performance (Jansen et al 2018). Although most friction blisters remain uncomplicated, they can result in antalgic gait patterns which have been found to lead to other exercise related injuries, such as overuse injuries of the knee (Reynolds et al 1999).

Knapik et al in 2019 reported in Military Medicine the results of a study of medical encounters affecting 800 recruits to the Special Forces Assessment and Selection (SFAS). They found that blisters accounted for the largest number of injuries in participants. Some 263 blisters were reported accounting for 45.9% of the category. In 1999, the same author produced another study where blisters accounted for 35% of all injuries in a 100 mile infantry road march. The authors went on to suggest that prevention of blisters may be achieved using antiperspirants without emollients, covering blister prone areas with paper tape of the micropore variety and specific types of sock systems such as different fibre content, sock knits, and combinations of layered socks.

In his paper published in 2016, Hoffman  looked at the aetiological foundation for practical strategies to prevent exercise related foot blisters. He outlined the key underlying causes of blisters of the foot such as friction which is affected by skin moisture, the presence of particulates, skin lubrication, normal force at the skin, and other frictional interfaces. Skin characteristics such as callouses, skin temperature, tissue hydration, skin adaptation (training), and epidermal health. Bony movement due to the characteristics of the activity, and the biomechanics and form. And finally shear modulus of the footwear such as insole and midsole characteristics. Along with reducing the number of shear cycles, the main blister prevention strategies include the avoidance of moisture, reduction in pressure by correct footwear choice in combination with low shear insoles. Maintenance of epidermal health in the avoidance of tobacco, and correct training regimes.

To add to these problems encountered by those who are and wish to remain active, there are also those members of society who suffer the complications of diabetes and of neuropathy causing conditions. These now represent a significant proportion of the population and are continuing to swell in number globally.

Worldwide, around 382 million people are diabetic with around 40-50% of the global population stratified at “high risk” i.e prediabetes (Snatches et al 2019).  Diabetes UK published their figures for 2018 reporting 4.7 million people in the UK have diabetes which is 1 person in 15, or 1 in 10 of the over 40’s. This number is double what it was 20 years ago. There were 169 diabetes related lower limb amputations per week amounting to 8793. There are currently between 70,000 and 90,000 diabetic patients having a foot ulcer being attended to in the UK in any given week. More than 4 in 10 of these will die within 5 years. The NHS currently spends £10 Billion on diabetes care per year, that 10% of the annual budget and around £1 million per hour on diabetes. These figures serve to illustrate a fraction of the potentially catastrophic outcomes of an episode of blistering or minor trauma in an otherwise healthy individual.

Thanks for reading ‘Blister Protection and Pathology’ by Mike McColgan

If you enjoyed this please look at his latest work with protective padding in the second part of his article (click here).