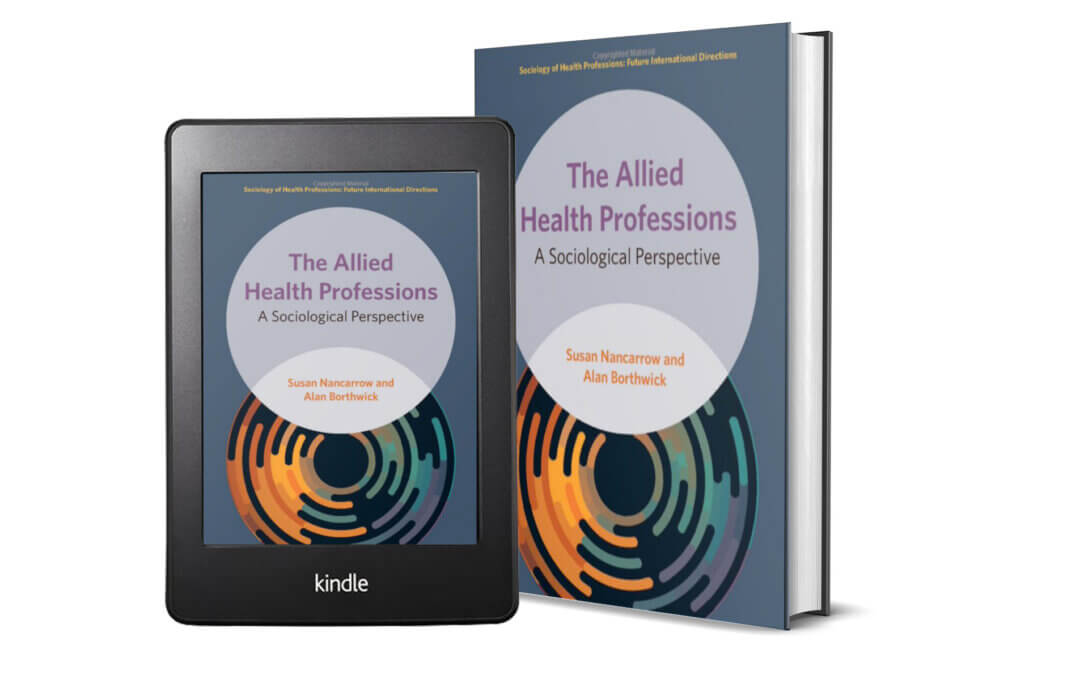 ‘Having largely exhausted all avenues in attempting to exclude, contain or control podiatric surgery, the medical profession sought to defend one last symbol of exclusivity and power – the use of title.’

Such is the gritty discourse that punctuates much of this deeply interesting dissection of the past, present and future of the Allied Health Professions. The book is co-written by Alan Borthwick, for so long the profession’s historian and natural successor to Colin Dagnall. Alan has tremendous oversight of Podiatry’s development in the last half of the 20th and early 21st century much of it gleaned from his ‘at the coal face’ involvement in such huge developments as independent prescribing and degree courses for podiatry. Alan’s co-author, Susan Nancarrow, is also a podiatrist by background, a former senior academic (Professor and Deputy Vice Chancellor at Southern Cross University), as well as a leading health services researcher. She is now, once again, based in Australia having spent 10 years working in Sheffield universities.

Although many of us have read and heard Alan Borthwick’s incisive reviews of the development of Podiatry, this book now widens the discussion to include all the professions listed by the Health Care Professions Council. Comparative analysis with UK and Australian allied health professions provides insight into who we are, how the allied health professions can learn from each other and how we should avoid making the mistakes and miscalculations of the past. Specifically, review of the sometimes uneasy and opposing relations with the medical profession and government could prove vital for allied health leaders and policy makers.

This textbook is the third in a series entitled ‘Sociology of Health Professions: Future International Development’ the series being edited by Mike Saks and Mike Dent. The editors’overview suggests the book is aimed at a wide range of health professionals with differing interests and responsibilities, including final-year and postgraduate students, academics, practitioners and policy makers. Studying and reading about sociology is not something podiatry practitioners naturally embrace. Indeed, such topics only began to find their way into the podiatry curriculum when podiatry students began studying alongside physiotherapists, occupational therapists and nurses. However this book contains many sections which will be of enormous interest to those wishing to expand their knowledge of the evolution of the Allied Health professions (AHPs) and how much common ground and shared experience there is with podiatry. The book also tackles some important on-going developments and takes a look at possible future outcomes. In short, this is a text that will not only provide excellent knowledge and insights for students and researchers but will also provide valuable explanations and reasoning behind issues of importance to podiatry and podiatrists such as where we stand as a profession, what the other allied health professions are, why we need assistants and assistant practitioners and why we as a profession feel undervalued, insignificant and poorly understood. On this basis the book will provide valuable background information for all practitioners and should be recommended reading for all members of Council of the Royal College of Podiatry.

The editors’ overview and introduction set the scene succinctly and in a manner that raises one’s curiosity. It invites you to ‘read on’. The introduction itself is masterly, anticipating the topics which we wish to see explored, such as an analysis and understanding of who the allied health professions are or why allied health professionals are puzzled as to why the public are uncertain of what and who they (the AHPs) are.

A number of case studies are presented throughout the text. These include the often overlooked relationship between allied health professions and nursing. One specific example is that of the diabetes educator, a qualified health professional who completes additional training to support the self-management of individuals with diabetes. Although traditionally a nursing role, since the 1980s dieticians, medics, podiatrists and pharmacists have been allowed entry to the Diabetes Educators Association yet diabetes education has been incorporated into nursing as a sub-specialty with enhanced status, employment opportunities and education, none of which are apparent for allied health professionals working in the area. The conclusion is that the large size of the nursing profession and the internal hierarchies within it allow it to expand its scope of practice taking on new activities in a way that is simply not available to the many allied health professions. Tellingly the most important difference between nurse diabetes educators and allied health professional was the persistent preferential employment of nurses to fulfill the role. In an important warning for Allied Health leaders this example demonstrates how a lack of professional hierarchy results in ‘horizontal substitution’ or a widening of the scope of practice without concomitant increase in status or remuneration. In something of a revelation in explaining why commentators rarely refer to anyone but nurses and doctors when they speak of NHS staff,  Nancarrow and Borthwick explain that nurses have managed to maintain authority through their large numbers and hierarchies as well as ambiguity around their caring function.

The book describes how a number of AHPs including podiatry existed long before medicine became a regulated profession in 1858. But almost all AHPs have experienced medial opposition in their bid for recognition and state registration. One exception being the HCPC registered profession of operating department practitioners (ODPs) whose professionalization suited the requirements of medicine. The value and the need of ODP professionalization is however questioned on the basis that it is a low risk profession that works in a highly structured and regulated organizational environment. In what is no doubt uncomfortable reading for ODPs, it is considered that apart from protection of title there are no material benefits to the regulation of ODPs which nevertheless comes at some financial and bureaucratic cost to the individual ODPs.

Podiatry is not spared (some) discomfort. Prior to state registration in 1960 the profession is characterized as ‘the conflict ridden, low status world of footcare’. The question is then asked, ‘at what point did podiatry consider itself capable of a once unthinkable expansion in scope of practice that would enable surgical practice?’. The question is answered in a few short pages of the most lucid prose which we were delighted to see makes reference to the 2006 PhD thesis of Margaret Graham.

The title podiatric surgeon and the intractable resistance of some sections of the medical profession has been a cause of many difficulties for podiatric surgeons but far from being a new front, the authors establish how sociology research considers these behaviours predictable and with much historical precedent. Whilst podiatric surgeons were assigned pejorative terms such as ‘hijackers’ that would ‘mislead, hoodwink and deceive patients’, such symbolic devaluation is characterized as a well worn strategy by which a competitor/usurper is objectively devalued by the current, holder of the professional title. The authors point out the wider issue, that the actions of some medical professionals have a powerful resonance in the modern world of healthcare given the loss of exclusivity of role and work tasks for all professions.

In a passage entitled ‘ditching the dirty work’ the contentious issue of support workers to the AHPs is comprehensively reviewed in sociological terms. Occupational therapy and podiatry assistants are a particular focus. In Staffordshire, occupational therapy assistant (OTA) roles were developed in part to provide work for local factory hands following the closure of the potteries. The way that OTAs interacted with the patients differed to that of the qualified occupational therapists. It was perceived that OTAs had a better understanding of the patient and their needs because they came from a similar background to the clients and did not use complicated language. When surveyed the patients were unconcerned about the status or the training of the OTA but valued having increased time with the OTA than they would have had with the occupational therapist. The development was popular with health care managers.

Another section of the book is devoted to diversity in the allied health professions with discussion of gender and ethnicity both in terms of recruitment to the AHPs and uptake of services by patients. This is an area of little or no research within podiatry and the issues discussed uncover a potentially rich seam of further investigation.

As for the future of AHPs, speculation would have no place in such a disciplined, scientific text but the book does finish with a discussion on the Allied Health Generalist or interprofessional practitioner. A model developed in Australia to address workforce shortages in rural and remote areas has demonstrated that AHPs achieved competencies in a negotiated range of tasks identified as interdisciplinary in nature. Far from being threatening, the process of identifying and training professional tasks and competencies enabled staff to gain a greater understanding of each other’s roles. The development was also popular with health care managers.

This book ranges widely but never loses sight of its aim to focus on sociological insights into the past, present and future development of the health professions. However, there are a number of developments which have influenced and impacted on the allied health professions which future researchers and authors may wish to consider, such as the impact of the introduction of undergraduate first degrees for these professions. Also, the impact and influence that the HCPC audit of individuals’ continuing professional development has had, bringing an enormous, lasting influence on podiatry and the annual conferences. Finally, the impact that the export of US podiatric practice had on UK practice. The role of US podiatrists in exporting podiatric surgery to the UK is discussed and acknowledged but equally the impact of podiatric biomechanics and the influence this had on the podiatry undergraduate curriculum and those in private, independent practice has been profound.

This is an outstanding textbook, thoroughly researched, written in an eminently readable way and a book which will inform, fascinate and delight many podiatrists. It will also be remembered for being ahead of its time and a first for podiatry. We understand that Alan Borthwick who recently retired from University of Southampton intends this to be his last book.  Alan is still very much at the height of his powers but we thank him for his outstanding contribution which has done so much for our profession as well as teaching us where we have come from so we can understand where we are at and where we may go.

You can read other book reviews and articles on Podiatry

Thanks for reading this book review ‘The Allied Health Professions: A Sociological Perspective’ by M J Potter and T E Kilmartin for ConsultingFootPain