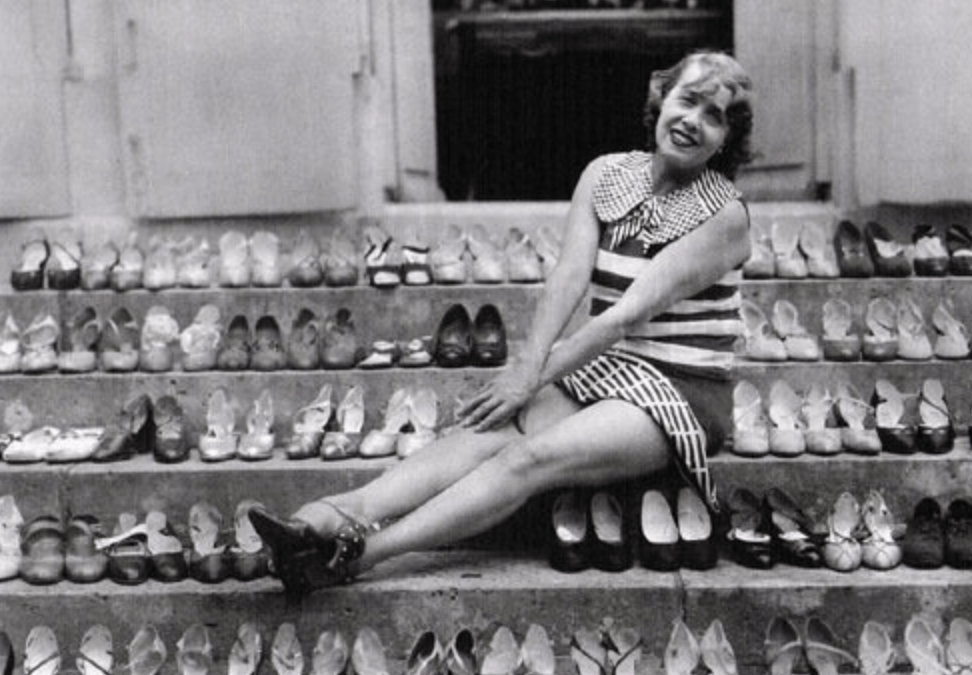 Even when you specialise in foot health you can make mistakes

While footwear can be tricky for some, the featured photo of The legendary Mistinguett, a French actress (1875-1956) c/o Kathy Thornburn 2017, has no such problem.

As a child of the late fifties, I had my feet measured with loving care. It was an independent shoe outlet called Pomfret. As the years went by the father moved on and left it to his son John, a smart forty-something man with tight but neatly creased trousers, and sharp-pointed slip-on shoes. His haircut might have come from the days of Elvis Presley. By the time I had finished my education as a podiatrist the grandson has taken over and John, like his father, spent more time in the small box office with a glass window. Originally x-rays had been installed for measurement but concerns over radiation exposure were rectified and the standard slide measuring scale was used instead. One recalls the simple actions of the fitter. The foot tickled as the heel hit the metal backplate. Then a further sensation was noted as the yellow tape enwrapped the foot to achieve the width measurement. The smells of the shop, new leather remain lasting and the busy activities as John Pomfret climb wooden steps, 12-foot high, to reach a mint green box imprinted with Clark’s logo. An invitation to walk around the shop (frontage shown) or take home on ‘approval’ concluded the decision.

Returning as an adult and now having to pay for my own shoes, plus tax, I selected a pair I thought were ‘podiatrically’ sound. Overconfidence and not a little arrogance allowed me to buy a pair that were too long. I never returned the shoes but decided I was clever enough to adapt these with an insock and tinkering in the orthotics lab at college. That was a big mistake and a serious learning curve.

Podiatrists should have a love affair with shoes and take a broad attitude to their patient’s attitudes toward styles and suitability. In reality, footwear can and does cause many foot health problems, and like my self-styled fool of an expert, patients, and the public will settle on footwear because passion overrides common sense and impetuous decisions ignore practicality.  My shoe fitting knowledge came from our trip to Clark’s in Somerset where we were instructed in the practicalities of shoe fitting. This led to a greater understanding of manufacture, while the adaptations needed for shoes came from a senior lecturer with a wealth of knowledge called Mr England.

Wandering into Clark’s shoe shop in Taunton I recalled my love affair with Clark’s shoes over a span of 50 something years. Ironically Taunton was in Somerset, the home county of Clark’s. I have tried many shoe designs during my life and reliability is a hallmark I am prepared to pay for. The anatomy of a shoe is best learned by dissection and our students were given this exercise when I was tasked to teach about footwear as a lecturer in podiatry in the eighties. My post-graduate education at the California College of Podiatric Medicine, San Francisco expanded my knowledge, not least in the market of sports footwear at a time when running had taken off big time. As I surveyed the Taunton shop’s offers during the post-winter sales, I found a shoe I liked enormously. The tall shop assistant was very pleasant but gone were the days of the family business and that personal touch. Modern shoe shops and I include most brands, no longer exude the passion I would so much like to see today. Shoes, like glasses, are vital pieces of apparel and like tyres on a car bestow comfort, warmth, safety as well as practical style to match daily clothing needs. The skill in fitting has largely disappeared for adults who are expected to say if the shoe is suitable or not. My assistant disappeared to find the right shoe partner. As she returned I looked at her and said, ‘I am sorry to have wasted your efforts. The foot is my larger foot and does not fit comfortably so the left shoe is not required.’

There was no doubt I was taken with the shoe, the colour and sensible design which would become a workhorse. Common sense prevailed and I would have to scout around some more. As an experienced foot specialist, my expectations are high in a market when shoes are so expensive. That said the cost of work-horse shoes is worth every penny if they last and do the job.

More articles on Footwear can be found on this website

David writes regularly as a podiatry author. You can read his Footlocker posts at consultingfootpain.co.uk. Share ideas on foot-related subjects and send a message to – myfootjourneys@mail.com. Do sign-up and stay in touch

Thanks for reading ‘Footwear can be tricky’ by David R Tollafield