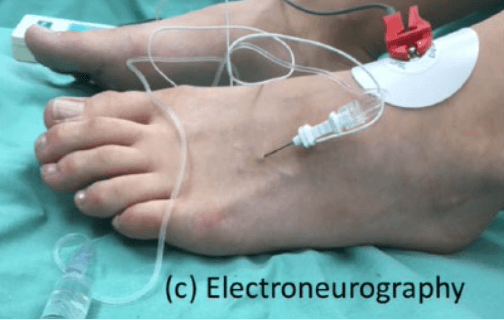 More has been written about injection treatment, especially steroid injections than any other form of management, other than surgery. My last article, The unsung and discredited management of Morton’s Neuroma – Pathways and Approaches, showed that there was a lack of evidence toward management with orthoses as shown in meta-analysis studies by Valisena (2007), Matthews (2019), Thompson (2020).  Lu (2021) should be added to this group of meta-analysis studies as a recent addition to a further 35 articles covering 2998 patients.

Today reports cover alcohol, neurolysis, and sclerosis with phenol, hyaluronic acid (HLA), Botox and capsaicin, many are gaining popularity.  Some of these treatment programmes deserve a review.

Thermal methods attributed to laser, radiotherapy and cryosurgery have also gained recognition in place of surgery. Whether thermal processes form a second stage treatment remains uncontested at present, although because these have invasive qualities and require image guidance, they form an adjunctive stage and will be included with surgery in an additional paper in this series.

The case for injection therapy has a much greater following and there is no shortage of papers. Bennett (1995) remains the standard reference for a baseline study and, although not associated with a random control still has much to teach us when designing studies. If 41% of a cohort of 115 can be assisted by conservative (footwear, manipulation and orthotic) approaches, then the second stage is injection therapy.

Greenfield (1984) reported on corticosteroids with 1% xylocaine for an interdigital neuroma. Patients were found to favour injection therapy over the conservative approaches with shoewear style modification or orthotic prescription.  In Greenfield’s retrospective study of 65 patients, 50% temporary relief was identified for a mean of 3 injections.  Total relief was recorded in 14% of patients after one injection.  Injection therapy failed in 11 patients who then required surgical excision; of these cases, 4 did poorly, Tollafield (1996).

Since Greenfield’s report, Bennett has provided evidence that suggests greater success at 27/58 patients benefitting from corticosteroid injection (46%) up to 1 year and 39% beyond 1 year. He looked at those who had symptoms for less than a year and those over a year in this second stage treatment, where stage 1 was conservative care.

Corticosteroid injections do not work by sclerosis or neurolysis but are based on their anti-inflammatory properties and soften fibrosis as plasticizers. In addition, the drug inhibits chemotactic migration of white blood cells, reducing the permeability of synovial membrane; stabilization of leucocyte lysosomal membranes, thus preventing the release of enzymes (Tollafield, 1996). The drugs of choice include methylprednisolone, triamcinolone acetonide and betamethasone or dexamethasone.

Thomson (2020) looked at 5 studies covering 310 patients with a mean follow up of 13 months and an age range 30-71 (mean of 50.3). The VAS scores were most commonly used, Studies by Saygi, Markovic, Mahadevan, Thomson and Makki were considered. Three studies showed a combined rate of 33.3% for corticosteroids.

Prolotherapy is not usually cited for PDN, although the explanation from Wikipedia below might be useful as it contains some overlap. Prolotherapy involves the injection of an irritant solution into a joint space. Most commonly, hyperosmolar dextrose (a sugar) is the solution used; glycerine, lidocaine (a commonly used local anesthetic), phenol, and sodium morrhuate (a derivative of cod liver oil extract) are other commonly used agents. The injection is administered at joints, ligaments, or tendons where they connect to bone. Prolotherapy treatment sessions are generally given every two to six weeks for several months in a series ranging from 3 to 6 or more treatments. Many patients receive treatment at less frequent intervals until treatments are rarely required, if at all. (Accessed 30/10/21).

Lu, in his review, provides detailed tables throughout his paper but summarises injection therapy overall as delivering complete pain relief in 43% of cases and no pain relief in 27% of cases looking at 8 cohorts. They considered that alcohol provided better satisfaction compared to non-alcohol. One criticism of this review is the confusion around the term neurolysis. Neurolysis is a chemical ablation technique that is used to alleviate pain. Neurolysis is only used when the disease has progressed to a point where no other pain treatments are effective. A neurolytic agent such as alcohol, phenol, or glycerol is typically injected into the nervous system. Chemical neurolysis causes deconstructive fibrosis, which then disrupts the sympathetic ganglia. This results in a reduction of pain signals being transmitted throughout the nerves. (Accessed 30/10/21).

Based on the medical free dictionary, there are five statements pertaining to the process. Point 5 would appear to apply to ethanol and phenol as well as some thermal methods.

Lu (2021) suggests that chemical neurolysis treatment was considered an injection intervention when the agent in question was either alcohol- or corticosteroid-based. Neurolysis yielded 68% pain relief from 5 cohorts. One of the most important papers recently emerged from Leicester and Mahadevan’s work resulting in several clinically valuable papers. Lu reviewed this source; Mahedevan (2016) looked at guidance with injections using corticosteroids and concluded that there was no benefit in using guided sonography (US) over blinded approaches. The authors used the visual analogue pain scale, Johnson’s satisfaction scale and Manchester Oxford Foot Questionnaire Index. The drug of choice was triamcinolone 40mg/ml. Two groups consisted of 36 patients, where 23 used US-guided injections and 22 without the US. They were followed for 12 months. Improvement peaked at 3 months then fell over the next 9 months. Sixty-one per cent (61%) requested surgery and 39% a further injection.

This author finds that repeat steroid injection benefit reduces with every other injection and should only be used in specific circumstances rather than by routine pathway. Other studies concur with Mahadevan regarding intraneural injections not benefitting from US guidance; Markovic (2008), Makki (2012, Schiffer (2013).

Makki (2012) divided his study of 39 patients into two groups based on sonographic (US) measurement, <5mm (17 patients) and >5mm (22 patients) unilateral lesions, then considered how each fared following corticosteroid injection. AOFAS, Johnson and VAS scales were used. All patients had symptoms for >6 months. As with Mahadevan, follow up was undertaken at intervals: 6 weeks, 6 and 12 months. At six months, the smaller lesions fared better, exhibiting a statistical significance p<0.0001.

Park (2018) looked at the cut off values for failed corticosteroid injections in 201 patients with PDN. Again, the implementation of US guidance was used. The cut off value was represented by measurement, with 6.3mm being considered the point at which injection therapy would lead to less satisfaction. Johnson’s scale and VAS scales were used. Dexamethasone was used as the steroid of choice. Six months was the considered cut off point when a second injection or surgery would be offered. The paper points out factors that need to be considered in determining the process of managing PDNs.

The joint box hypothesis was not mentioned, which perhaps is an omission from adequate searching given that Govsa’s work (2007) was 11 years earlier than Park’s study.

Park highlighted age and the size of the neuroma as a predictor of success, implying earlier management was better than delayed treatment. Corticosteroids worked better for those younger patients, and failure increased as the size increased. Size overall was a better indicator. Compared to Bencardino’s view that size may increase without symptoms, other factors need to be considered. Nonetheless, Park’s study is one of the largest to date.

Injection therapies can all cause pain at the site of injection, haematomas, infections and failure. Steroid injections can cause fat wasting, skin thinning and depigmentation. A so-called flare-up can arise in a small percentage of patients, which usually resolves within 2 days. 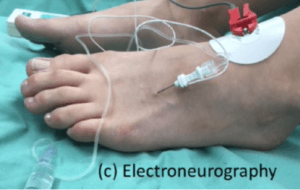 electroneurography ENG as used by Christof Pabinger and Elena Somaila 2020

Much study has been given to the use of corticosteroids in the literature. Dockery (1999) advocated alcohol injection, and his results suggested 82% were completely resolved with a follow-up period of 13 months. Since this period, several papers have considered alcohol, and the results have been both encouraging and disappointing.

Matthews (2019) refers to sclerosing with alcohol. Alcohol will act more as a fixative than an anti-inflammatory chemical. DeHeer (2020) considered that experiments in rats had a positive effect on reversing fibroblastic activity. The paper is otherwise poor and has a small study number with inconclusive results of any clinical value.

Gurdezi (2013) also considered their injection treatment sclerosant for 45 patients with a follow up of  5 years. As with many, they used VAS and Johnson scales. Most studies were considerably shorter, between 10-13 months. Twenty-nine (29%) of Gurezi’s cohort remained pain-free at 5 years, while 36% went on to have surgery. Complications included those previously mentioned above and ongoing numbness. Thomson (2020) looked at alcohol as well as capsaicin and botox injections. The latter 2 had limited single studies. Capsaicin (Campbell 2016) had undergone neurectomy, and the study was weak and demonstrated a small sample without a control group.

Pabinger (2020) carried out a prospective study on 30 patients with 70% alcohol using fluoroscopic and electroneurographic guidance (ENG see above). This paper has not been the subject of a systematic review given the use of ENG. The measurement used VAS, Short Form -36 pain scale, and AOFAS, which showed improvement over 5 years. Ninety per cent of their cohort were involved with sports, running, cycling and tennis. MRI showed a reduction of lesion size from 8mm to 4mm. The study did not have a random control trial which was disappointing as ENG is not common. Pabinger gave 85% improvement (28/33) after the second injection of alcohol.

Somaila (2020) looked at a larger cohort using similar methods of ENG and ultrasound for the diagnosis with ethanol. The larger study of n=115 and follow up 8.3 years contrasted to many shorter studies. The outcome suggested improvement in 90% of cases, but this was a retrospective study. Somaila was a co-author of the Pabinger study.

Lee 2018 used hyaluronic acid (HLA) for the management of PDN. The measurement tools included VAS, and the AOFAS forefoot scales. Injections were performed with US guidance. They hypothesised that HLA was both anti-inflammatory and helped collagen with cell proliferation and lubrication. Follow up continued for 12 months. Severe pain arose following injection for 1-2 days in 3/83 patients. AOFAS score rose from a baseline 32.2 to 86.5 at 12 months, with the VAS scale dropping from 73.1 to 23.0 at 12 months.

The conclusions taken from the systematic and individual studies show benefits based on steroids, alcohol, and hyaluronic acid injections. HLA, however, has too few studies to be conclusive. Alcohol and steroid may show a benefit, but at present, without fully understanding the pathology, we must assume size plays a significant part in the success of treatment at any point. There are mild complications, including pain from all injections, and patients need to be warned. Reliance on repeat injections for steroids seems poor; while alcohol may offer additional benefits, localised sensation loss seems to be one concern that could disappoint patient outcomes. Doubtless, injection treatment is better than surgery, and within reason should be offered without overemphasising its limitations. We still do not know the long term effect because many studies have been too short.

For a full set of references 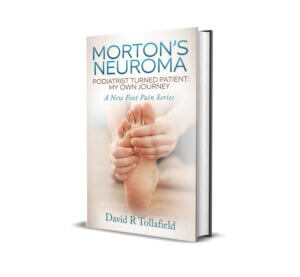 available from Amazon books as an ebook and paperback

Why not read the fifth article Thermal or surgical choices for Morton’s Neuroma?