Rams and Rhinos and Feet 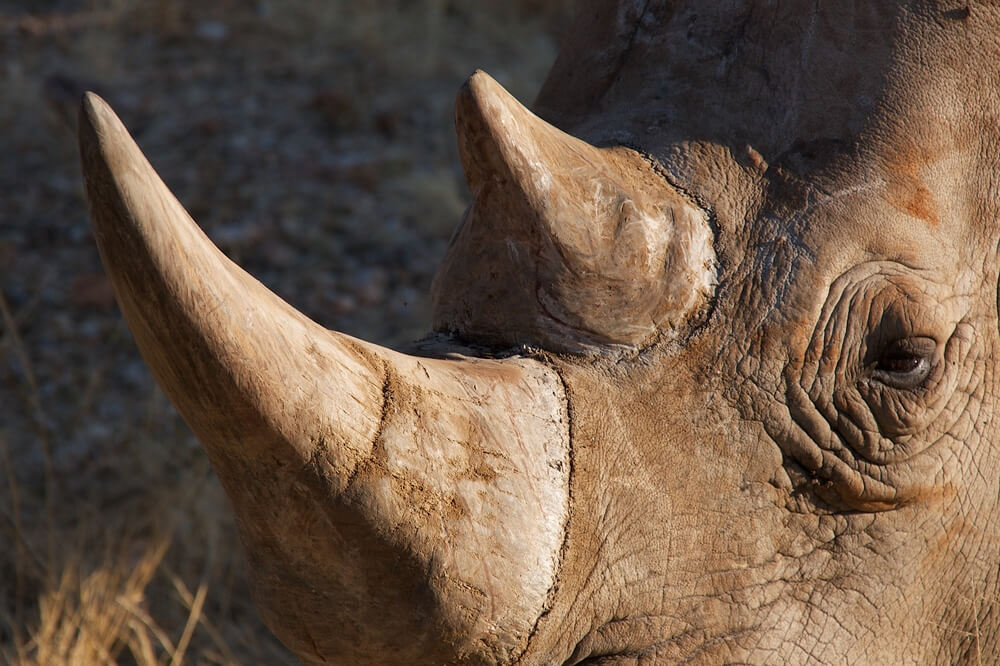 You might wonder what rams, rhinos and feet have in common. Unlike the elephant tusk which is made of similar material to teeth the rhino horn and that of many animals comes from the same protein found covering skin. While fingernails have the power of a weapon, toenails are just tucked away and unnoticed. Because nails are hidden away until a problem arises, they are ignored. Nails exposed in sandals where the climate warmer, nails and toes are more visible. But for us, in the UK, the majority of feet are covered up. This article is the subject of thick nails associated with medical problems. Yuck, you might say..

You might wonder what the point of toenails are, not least why they cause problems? These densely packed cells make up a flat structure that sits at the end of the toe over a bone called a phalanx and is exposed to pressure. Now if you had an impressive horn like our rhino, maybe it would make sense as a weapon. The nail might act as a deterrent if pointed, and as a child aged 7 I still can recall the burning pain caused when I upset a girl my own age as she raked my nose with her sharp nails!  Otherwise, as a piece of flat nail, it seems pointless.

Some pictures might be less appealing (but there is no flash photography) but the subject may not be for all consumers! If you have a thick nail problem or want to be intrigued by conditions of the nail, then do read on…

Nail growth is slow at around 0.1mm a day and is exposed to damage along its sensitive ‘growth cells’ called the nail matrix. The matrix is shown in red but the cells in the lunula region (marked) are sensitive to damage. The white coloured lunula is named from its half-moon shape. The other part of the nail bed easily exposed to injury sits at the end of the nail (hyponychium). The attachment is sensitive to damage and if you like me have wrenched a fingernail before then you will understand how uncomfortable this is.

Many of us have a damaged the little toe nail. This often arise when those first pair of shoes are fitted in early childhood. At a young a tight shoe will lead to permanent damage. As we age nails are more resistant but damage from sports or other activities can lead to damage. Podiatrists talk about case histories, a diarised form of story telling covering the progress of a condition. As podiatrists, we concentrate on nail health and prevent tissue damage and pain. You can read my post on footwear fitting, click here 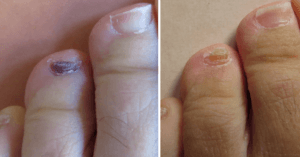 Advice about the correct shoe
After a sixty-minute walk in light trainer type shoes the fourth toenail of a man appeared dark and then went clear after a few weeks. He reasoned this was the cause of his pain and indeed it was (Figure 2a). The nail is a solid structure made from three distinct layers to look like one. The third toe and nail are normal but the darkness seen with the 4th toenail is blood under the nail. This is called a blood pool which goes hard called a haematoma.The simple act of walking 3 miles allowed the toe to piston back and forwards in the shoe. This tore the small blood vessels between the nail and softer nail bed. Podiatrists call this a sub-ungual haematoma. Sub-ungual infers under the nail.  Five months later the nail looked as in Figure 2b. The nail had distorted creating a thicker roof and separating. With careful trimming the nail settled with new growth.

Nail damage does not always have to be permanent. And yet a child with tight shoes can have a permanent deformity. Repetitive damage in adults causes the same problem. It is important to ensure the shoe is used for the right task and that it fits well and does not move back and forward.

Other medical concerns with nails. Read on… click here

I treated a lovely lady for many years passed on to me by her cancer specialist (oncologist) who would not let anyone other than me deal with her. The cancer drugs damaged her nails and in the early stages, the drugs used put her at risk from poor healing. Her nails were deformed, discoloured and separated so a large cavern appeared causing a build up of soft debris.

From rhino to ram

Occasionally patients come with bad habits and destroy nails through picking (onychotillomania). The nail can shrink with thickness or can form cracks and distortions. The most impressive of all nails are those associated with the shape of a ram’s horn and are actually called rams horn nails. The figures above are rather self-evident. The nail has a series of ridges better known in medical circles as onychogryphosis. Management is rewarding and after 20 minutes a nail can be made to look presentable. Although rarer today these are satisfying to treat because most medical doctors would be shocked at the appearance, let alone know where to start. The temptation might even be to ask the vet to look!

Having taught a module on onychology, not to be confused with oncology (cancer speciality) the ingrowing toenail, the fifth commonest referral from the GP is often of more interest. Some nails affect mobility to the point of disability and this is why in old age that foot health care is provided for all when required. With the sad loss of funding in the NHS for elderly foot health care, many have to turn to private means and often non-podiatrists are employed. While this might be fine for nails that you or I could cut as laypeople, the more difficult nails need specialist care and training. If you dare to look, I have added an additional part to this article. If not switch off now. I should add that you cannot manage nails with the nail clippers shown in the adds with the type of nails shown or discussed in my article.

And to round off… Dr Nail Fan Club

If you want to see the type of problems confronting a podiatrist this absolutely naff ‘YouTube’ video provides plenty of imagery. Click here on the  Dr Nail Fan Club, but be warned, it is pretty grim and full of good old American US advertising. It actually shows some pretty nasty nails, but it is a short video (under 3 minutes) so not too long. This video does portray the nail problem well. However, unless you want to fly the States you can find help nearer to home with perhaps a little less ‘in your face’ promotion.

Thanks for reading ‘Rhinos, Rams and feet?’ by David Tollafield