Webinars and the new lecture forum 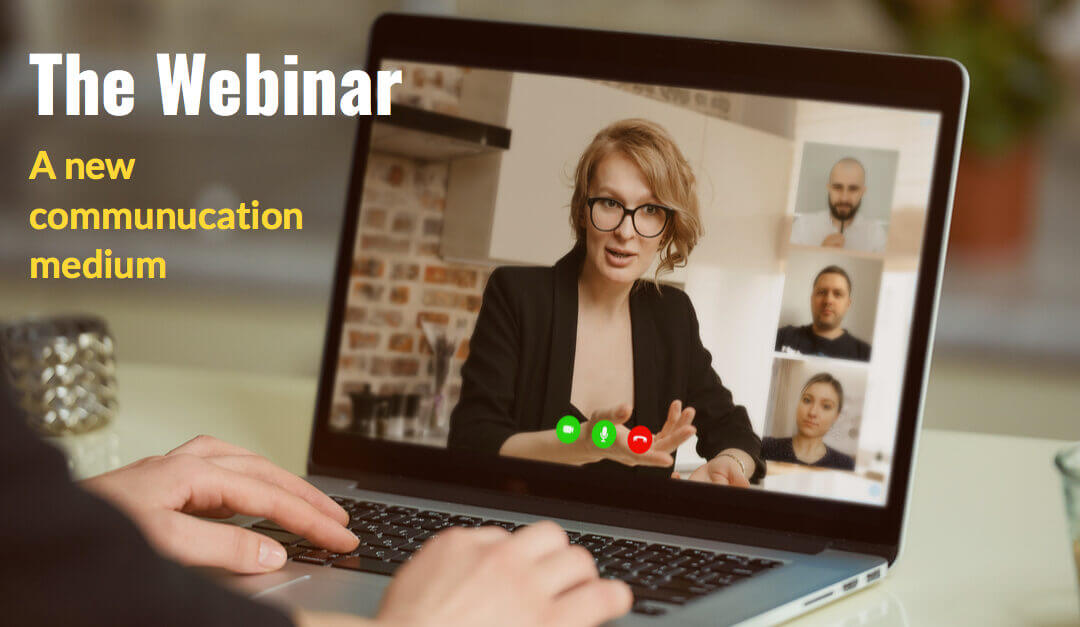 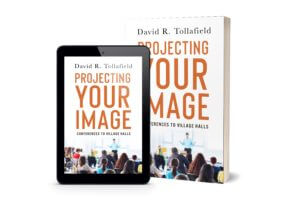 No-one in the world of communication can have failed to appreciate that the internet has come of age during lockdown. So are Webinars the new lecture forum? This question is considered in this article for podiatrists and methods of supporting continuous learning. I will be looking at smaller webinars rather than the big conference productions now seen on-line and produced professionally.

All contact venue conferences ceased during 2020 and even those planned months ahead were sent into chaos. It is hard to imagine the cost to companies hoping to promote their brands. People who would meet at conferences rely on that special contact that allows business and knowledge to flourish. I was invited to five conferences and branch meetings during 2020. All of this planning went out the window. Many systems have been developed for business rather than seen as social systems like Zoom. Zoom in particular has taken advantage of families wanting to stay in touch nationally or even internationally. In fact, YouTube does provide a service for live conferencing. The two podiatry organisations The College and The Institute both have run different presentation products.

This article was based on a small section of my book called Projecting Your Image. Conferences to Village Halls.

Reading score for this article = 62

The Future of Webinars 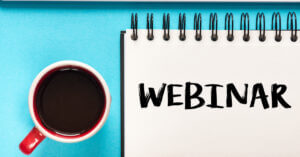 The principles behind public speaking are unlikely to change. Technology moves rapidly, introducing us to new communication methods. The idea of presentations being committed to video streaming, once a dream, is now possible. YouTube ranks at the top with Google Hangouts, Live Stream, Vimeo Live and Infiscene adding to the list of many. I made a 10 minute video for one conference which I can share and is now connected to my December (2020) Newsfeed. This was launched through YouTube. However there has been a new generation of software media produced or even expanded during this period when we were all out of commission.

Team Viewer, Zoom, Mitel’s Micollab, Cisco webbed, Goto meeting, join.me, Team Viewer and Microsoft Teams are just some of the wide range examples of web conferencing systems. An uploaded video works well but does not always have an easy connection with the conference systems.

Webinar as a seminar

Webinars are  popular and webcasts can be turned into seminars. Feedback and questions are fed back to the speaker and validated before they appear at the side of the image on the computer screen. This allows people to see incoming questions. Webinars usually run from 20 minutes but can be extended. The length of time and numbers attending depends upon the cost of the online service. With Zoom, this is usually 40-60 minutes for the free version and for smaller audiences, while subscriptions open up more facilities. The Royal College’s conferences will be arranged on an organisational basis for which there would be a fee.  Larger conference systems have and on cost. 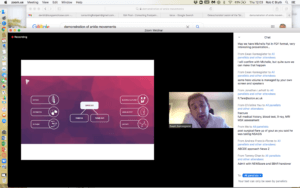 I was delighted to attend, well I mean virtually attend, the Southern Deanery (College of Podiatry, Faculty of Podiatric Surgery, meeting on Thursday 3rd December. This was expertly chaired and the use of slides and speakers raised the value of such educational meetings. Adapting the screen from small to large options gave flexibility. The questions posed by delegates are placed on the right hand side. Slides are shown next to the speaker and the delegates were invited to make screen grabs (as illustrated). No doubt the next Podiatry Now will cover the experience. Such an undertaking will not be as simple as local or regional webinars.

My immediate critique delivered a positive reflection on this clinical meeting and those speakers I saw spoke well and their material was presented effectively with good quality slides. The Chair, Ewan Kannegieter, provided advice about the slide programme favoured by the Southern Deanery. These were known as Pulse Notes. Click on the blue to find out more. 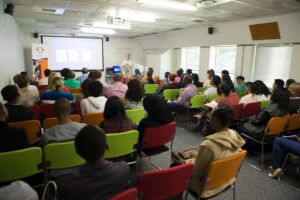 Talking to podiatrists in Johannesburg in 2014

I must admit that I prefer a real audience when speaking. That doesn’t mean I’m not open to new ideas. I have made some self-help films, largely for my book on bunions. I have added a couple of Podcasts which are audio and you can hear these on PodBean. The principles are similar but have no audience interaction.

Online presentations should be short, but webinars with interaction can be much longer. Webinars are often a free resource. However beware. There is usually a sales pitch somewhere along the line, so it is important to not find yourself caught out.

Making a dummy run (only blue colours are uploadable)

I decided to put my 10 minute presentation on YouTube as it was a way of me practising my talk. As I mentioned in my book, practise is important and as the talk was time dependent and should always be observed by the speaker. One of the important ingredients of public speaking is to know what you are going to say, how you intend to say it and how long you need to allocate the presentation. It matters not whether you are doing a presentation live or by any other medium.

By undertaking a dummy run you can see some of the flaws that can creep in. I will let you identify my flaws which I have left in as a training video. My watch word is ‘REFLECTION!’  Before Lockdown, most of us had not seen the potential for ZOOM. I’ll come back to Zoom shortly, but I continued to believe  the traditional way of setting up a lecture on line was to make a film. This is then edited using a video suite and then uploaded in the correct format to a platform such as YouTube. You can upload it and publish your own lecture or talk without having to travel around the country. This has many advantages, but you will lose that personal connection with your audience. Live presentations will always win out as it retains a sense of human frailty that we all have. Zoom (read any of those web conferencing methods above) can provide this same medium but it is important to have a structure.

CRITIQUE:  bad bits over the Good

(1) When sitting in on a webinar, I noted that the speaker was relying on the attendees (audience) who of course were sitting at home on their computers. The participants were texting each other and no-one in particular. One could see the questions on the side of the screen as they were off the wall comments. I sat in on this rather disastrous webinar. The speaker was mature, experienced and giving advice as an editor. The webinar was about writing. However, she made one vital mistake that wrecked the whole hour-long tutorial. I left the (virtual) room at 25 minutes because I placed a high value on my time and could see the audience had run away in chaos. This is the advantage of watching something at home, you can leave, make a cup of coffee or attend another requirement and come back. As a presenter you want to keep your audience together.

(2) A recent webinar used multiple speakers. The lead came to the feed late and then the webinar descended into a lengthy series of self gratification of past memories between the presenters. Workshops, which have live contact can suffer from the same problem if not properly led. Sessions are made up of a series of talks often running along a common theme that may be led by a Chair. The chair is the controller of questions for a webinar. The speaker needs to be free to concentrate on questions fed in by the controller or by addressing the written queries that the audience will have typed.

Texting questions as the audience listens does not interrupt the talk. As the speaker progresses each typed question lags behind real time. The audience can see these rolling down to one side of the screen. The audience often write about something they feel a passion for. Some like to write without any clear rationale and some can questions become asinine. Texting is both a strength and weakness of the webinar because distraction arises. While the audience may achieve an answer, the quality can depend on the controller or chair using that particular question. For the most part speakers don’t dip into the questions although I did a webinar with one group and saw a question that I thought relevant and wanted it included. The meeting relies on those questions if the webinar is interactive and seminar in design.

Chairing meetings at live conferences is little different and should abide by the same rules. 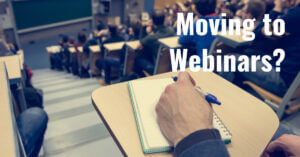 A new idea for branches?

Having talked about Zoom, my daughter, an educationalist, suggested Loom to me. I set this up as it allows a similar method to the YouTube. The basic package is free and I wanted to try it out. The latter method that I had used required a video suite to edit my PowerPoint slides (mentioned earlier). This can be quite a lengthy process. Loom allows you to take your PowerPoint and put this together as you would a normal talk. In other words you make your PowerPoint slide show up and import it into Loom.

I had a go with Loom after cancelling a live branch lecture. We decided that I would create a Loom talk using PowerPoint. This was timed at 30 minutes and then I created a Zoom meeting so we could discuss the content. All went well. The Loom was password protected to use exclusively for the group. At the allotted time we connected, but the group had missed the link and so had not digested the material beforehand. I delivered the Zoom to our small group. Socially distancing of course. Through reasonable preparation I was able to talk off the cuff as I did not know what to expect. These can become hair raising moments initially. Certainly I hope that we will not seem the demise of the formal lecture or conference for that would be a tragedy. However I believe that learning how to present is important even with this new medium. You can order my book on public speaking from Amazon.

In case (1) the organiser had relied too much on audience participation. When this wasn’t forthcoming, she simply didn’t have enough material. She kept repeating the same things until she became completely lost in a cycle of unhelpful repetition. If you lose your audience, trying to claw back into their favour can be an uphill challenge. No-one had told the audience THAT THEY WERE DRIVING THE MATERIAL!

In case (2) well it was just disorganised chaos. If you wanted chit chat fine.  I like to have some clear goals to my talks. In my own case I tried to assure myself I achieved what I had set out in the Loom presentation. I re-sent the Link so the branch group could still go back over the talk. I had missed sections out but this was due to time constraints and the fact that Zoom cut out a couple of times. The group did well to keep the momentum going. There are more plusses to the webinar which will grow in time and replace many formal conferences and smaller meetings. This was already happening, but the rate of change has expanded since Lockdown No.1.

Support for Podiatrists and others in Public Speaking by David R Tollafield from Amazon books now available in paperback.

Projecting Your Image. From Conferences to Village Halls
PowerPoint is more than a slide programme

Thanks for reading this article ‘Webinars Good or Bad?’

Consider signing-up to stay alert to new articles each month