The unsung and discredited management of Morton’s Neuroma 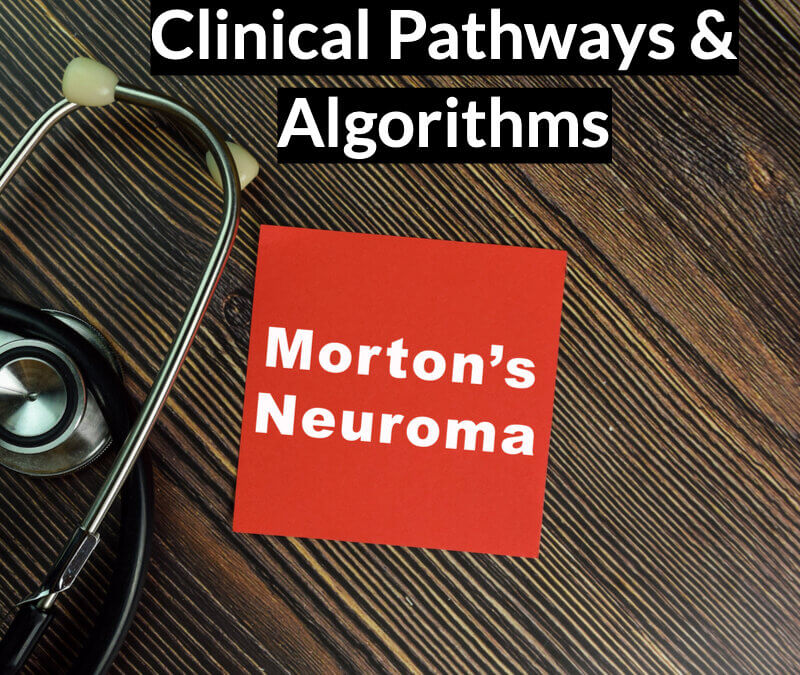 The unsung  and discredited management of Morton’s Neuroma exists because it is neither wholly Morton’s neuroma but a product of misunderstood pathology. The treatment that is discredited is associated with the fact there is insufficient research of a standard that can prove or disprove that such care works or fails. To do justice to this article it is best to start at the start with No.1 . 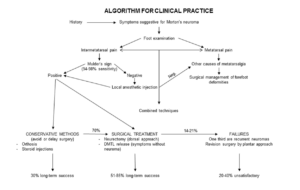 No.3 – Protocols, Guidelines and algorithms for Morton’s Neuroma

This is the third article in my new series covering plantar digital neuroma (PDN) for professionals and those interested in approaching this problem seen as the fifth commonest foot condition seen in foot surgery (PASCOM 2021 data). There are dangers in producing protocols as these are often cited as part of strict rules when clinicians need latitude. For example, we have learned that neuroma lesions that have enlarged beyond 5-6.3mm do less well from injection management and changes in pathology around the nerve bundles reduce neuron effectiveness (Makki 2012). Raouf (2019) suggests the cut off point is <6.3mm while Benecardino (2000) points out lesions of 10mm found on routine MRI can be asymptomatic. There is an algorithm based around conservative – injection – surgery but the types of injection are still being explored with a review of new techniques such as radiofrequency ablation (RFA), alcohol injection and cryosurgical ablation of which only RFA carries investigation by NICE.

Protocols should be based on absolutes; for example, they fit ADVANCED LIFE SUPPORT schemes where some degree of automaticity is important as part of efficiency. Unfortunately, PDN does not appear simple, although Di Caprio (2018) sets out one algorithm from their literature search (above). First, there is an undefined period where symptoms will raise a few suspicions for the patient. Second, even early signs will be ignored unless there is ‘break through’ with the discomfort that can be registered as pain and inconvenience, i.e. the number of times someone has to stop to take their shoe off a rub their foot. Matthews (2019) concludes their meta-analysis report with the statement, ‘…no high quality evidence currently exists to inform intervention should be the gold standard for first or second-line non-surgical treatments.’ We turn to a 1995 paper when Bennett published the first idea of staging.

In 1995 Gordon Bennett published one of the first papers showing staged management and the effects over time. This sequence could provide a baseline algorithm or set of rules to guide rather than mandate an action. The first stage is conservative care, followed by non-invasive injection of a corticosteroid and lastly, surgical excision of the neuroma. The patient would present with a variety of symptoms, as illustrated in his table below, representing 115 patients. More than one choice could be made and the figures given are out of 115.

Memory and the poor historian

All clinicians appreciate that the quality of historical memory is unreliable until patients recognise a problem. The grey area around recall remains during an unaccountable period before the patient can recognise some of the above 9 types of pain or sensation change in order to seek help

A thorough understanding of pathology is required to present the patient with a comprehensive programme that they can introduce. Footwear, a poignant compression feature, should be changed or modified in fit, design with special attention to the forefoot and heel. Thirty-nine percent of Bennett’s cases noted fashionable shoes, and 60% found relief when removing shoes. Morton, in his original works, recorded five of twelve patients who attributed their problems to footwear.

The use of orthoses and metatarsal pads have long been a method used to assist forefoot pain in orthopaedics and podiatry, with the metatarsal pad and raised insole below the arch being key designs. On the other hand, Bennett found 47/115 patients (41%) improved with shoe modification. In addition, the timeline associated with symptoms suggested 43% of those suffering under 12 months improved and 38% improved where symptoms lasting longer than 1 year.

In searching the literature, a lack of evidence exists to demonstrate value from orthotic management. Albano (2021) used only 20 patients applying ultrasound (US) to evaluate custom made orthoses for plantar foot pain, but 81% (22) had intermetatarsal bursitis, and only 3 patients had Morton’s neuroma. Dominquez (2020) looked at physical therapy. While describing toe stretching and deep pressure, this was a single case and follow up was only 2 months. The most helpful comment referred to a citation from a different paper highlighting inflammatory mediators and peripheral nociceptors could be helped by mechanical stimulus. Patient compliance with exercises was noted. On a personal note, a patient who was operated for neuroma found post-operative discomfort until she decided to seek reflexology (manipulation therapy) unilaterally. Her success was positive, but the experience was painful. Matthew (2019) carried out a systematic review looking at non-surgical interventions. Citing a chiropractic paper (Govender, 2007) using a single-blinded trial with manipulation and mobilisation again revealed a short follow up time, but this mode of management might reduce pain by breaking down the connective tissue. Applied to dermal-epidermal post-operative scar tissue, this seems to have value. Matthews concluded ‘no studies assessing the effect of orthoses on foot function related to MN were found by the review.’ Valisena (2007) reviewed one paper associated with orthoses out of 29 papers, and filtered the selection down from 283 titles for not meeting the criteria e.g prospective, retrospective and random controls (RCT). Thompson (2020) undertook a systematic review 13 years later focusing on non-surgical treatment for Morton’s neuroma. Orthoses occupied a short paragraph citing Kilmartin (2006) but for their small sample of 23. Again only a short follow up period arose, with 28% of patients going to surgery. Kilmartin’s paper was the only review by Valisena for orthoses. While designed to effective research standards, the podiatric paper looked at the theoretical use of the cobra felt wedging for neuroma patients and proved that this method of modification was ineffective. No such paper has been followed up to look at bespoke orthoses with the credentials of a prospective high-level RCT study. Valisena concludes that for RCT, better results were shown for invasive treatment. Saygi (2005) used combined strategies of footwear modification with orthoses and corticosteroid injection as two groups. There was no statistical difference between groups, although the results for a cohort of 82 patients are shown below having being followed for 12 months. Di Caprio (2018) points out conservative care offers around 30% sustained benefit from a literature search.

We lean on clinical evidence heavily and the use of meta-analysis, while important, can exclude some pearls that can guide development. When it comes to conservative care, only orthoses are reviewed in detail and followed up for a short period and contain insufficient numbers in the studies. Manipulation is certainly important and yet again suffers the same study design problems. Valisena is correct in desiring RCTs as this is the gold standard, whether by pro or retrospective study designs. Case histories are important to drive studies, so my own experience with a bespoke orthosis was positive for 4 years, but further compressive damage from a tight cycle shoe advanced both the damage. It increased the size of the neuroma to a higher symptomatic level. The absence of quality studies remain, and those that exist can only act as pilot studies at best; at worst, they are inconclusive and suggest conservative care does not have a value against other methods. For this reason, Bennett’s paper remains important because it provides a sense that conservative care can be of value, as shown by his evidence that 41% of a cohort of 115 benefitted. However the research was retrospective over 3-4 years and would have to be considered of a lower scientific level of evidence.

The unsung and discredited management of Morton’s Neuroma is not that treatment cannot work but that in many cases some treatment regimens are too late to arrest the significant changes associated with nerve pathology. Podiatry needs to change its approach to advice and become more proactive now that many clinicians use ultrasound.

Thanks for reading this series 3 article “The unsung and discredited management of Morton’s Neuroma,” by David R Tollafield