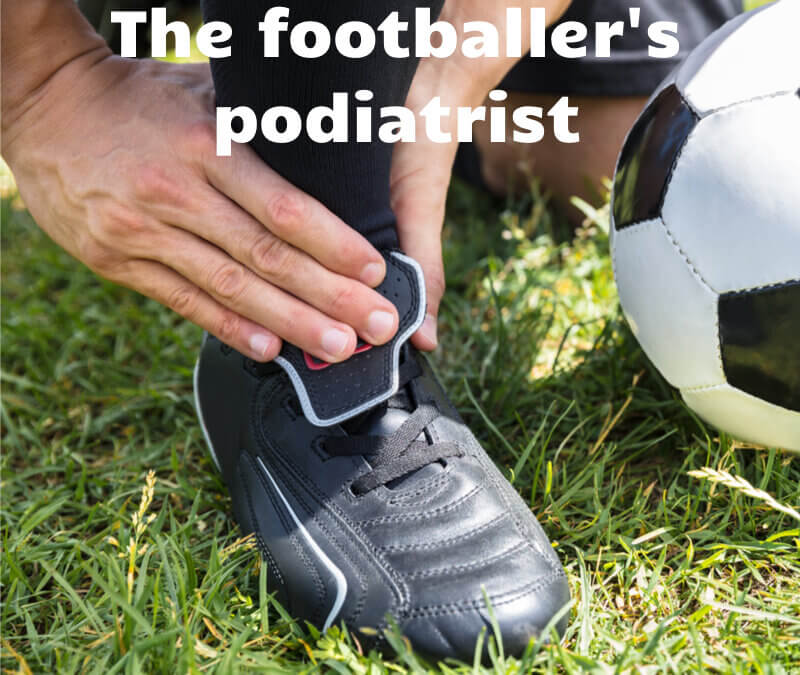 A car crash into sports podiatry

A Career Series in podiatry – Trevor Prior 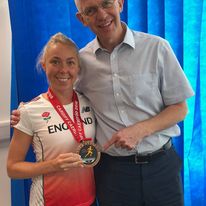 This article features The Footballer’s Podiatrist seen through the eyes of Trevor Prior. His career was a car crash of different aspects of podiatry – he wanted to do everything but his motivation kept returning to the one subject area – everything sports. His journey into podiatry was perhaps owed to his mother and father who were both podiatrists. His father, Harold, was the podiatrist for Arsenal football club in the early 1960s. When offered two tickets for the Football Association cup final he turned them down; he didn’t like football. Not so for the son Trevor, although born in Highgate, he is to podiatry as Michael Caine is to acting: a direct speaking East ender – only taller! Although Trevor is a consultant podiatric surgeon, his heart lies in sports of which football is one of his passions. The story did not start there though.

Before the inception of podiatric biomechanics as a core subject and long before the term musculoskeletal podiatrist entered the vernacular, there was some mystery about the subject. Approaching one lecturer at his Paddington college in London (no longer in existence) he asked, “ this biomechanics lark, are you going to teach it one afternoon? I’m going to need that.” And he went – no, I can’t teach you that in an afternoon!”

Unperturbed he delved into the subject with enthusiasm, saw its potential and then returned to Paddington college with a teaching qualification to begin his passion for teaching alongside some of the well-known podiatrists at the time. He helped introduce biomechanics into his NHS post at Tower Hamlets where he ran a rheumatology clinic. His manager Don Beaton agreed to purchase a treadmill so the team could undertake controlled gait analysis, albeit without a video camera initially. During his early years, Trevor was asked to lecture on sports injuries. His reply was couched with the usual stark East end sounding brevity with the explanation that he did not know much if anything about sports injuries! Finding Steven Subotnick’s book, the Running Foot Doctor however was to make an impact on his early career. Subotnick made podiatry into an important specialty for podiatry the world over. Don was also one of Trevor’s earliest mentors and encouraged him to become involved with West Ham football club, previously at Upton Park until 2016 where he could care for players. 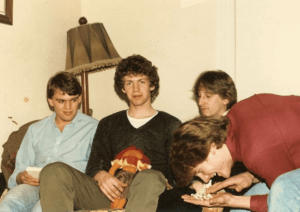 A youthful Trevor, second from the left, in his student days examining the foot under the eyes of his friend, bent over the skeleton made of 26 bones

Football clubs, research and a degree

Having earned his Diploma in Podiatric Medicine from Paddington – previously called Chelsea after the original college location – he entered the second cohort of a 3-year part-time degree in Podiatry at the Polytechnic of Central London, now the University of Westminster.  The upgrade to a degree provided a thirst for research for many podiatrists at the time, not least Trevor who undertook a project on the ‘effect of an orthosis on oxygen consumption in runners with and without shin splints.’  With his knowledge of oxygen consumption measurement, he embarked on work with a physiology laboratory and used his links with a triathlon club to acquire clinical data for his thesis. The study was completed for his degree project as well as undertaking work with Essex ladies for free to gain experience in biomechanics and sport.

A medical officer for Leyton Orient football club contacted Trevor. “I’ve got this runner. I think he needs some orthotics. Any chance you can see him?” Trevor was only too happy to connect and was put in touch with the team physiotherapist which ignited a happy relationship.

The medical room at Orient at the time was underneath the stands. The roof was slanted and you could just about get a couch in it. Because of his height, Trevor had to stand on one side of the room because of the roof. He was paid £50 a month and was expected to attend all the home games. Upon joining West Ham football club he had two season tickets and a car park pass. He would arrive there an hour beforehand and stay an hour or two afterwards.

During the first year, he saw 14-year-old apprentices, many of who became household names. On one occasion he took a podiatric colleague to a game and they viewed the medical room. Given prime seats, they could watch everything happen from running down the tunnel to action on the pitch.

“One of the lads got carried off. He had a knee injury. We went into the changing room afterwards.” He told his colleague that the player had ruptured his anterior cruciate ligament. Asked how he knew he said,  “Well, looking at his knee. It’s swollen up straightway. If you get a cartilage injury, it swells up in the evening. If you rupture your ACL, you get hemarthrosis.”  The colleague replied, “I never really understood why you did that before but I get it now.” As Trevor explains – “you’re at the sharp end. You’re seeing a lot of injuries.”

During the Euro ‘96. One of the squad had hurt his ankle and saw Trevor who went on to treat many well-known sportspeople over the years.

Trevor’s journey continued with a new company producing orthoses in the UK through Canonbury, a podiatry-based distributor.  Phil Vasyli had an orthotics lab in Australia called the Vasyli Orthotics Laboratory. He worked out that 70 per cent of the prescription orthotics were made to the same prescription. He decided to make an orthotic out of a thermoplastic called polyvinyl acetate (PVA), so it could be heat moulded. He was the first to deploy a higher standard orthotic that mimicked the qualities of custom-made models. 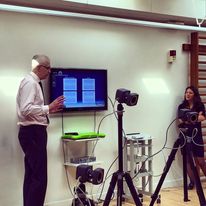 Trevor started to undertake lectures in biomechanics with Vasyli orthosis. His work in the field of football expanded at West Ham and was to become involved with the training centre at St George’s Park in the West Midlands later on in his career. Of course, employment with the clubs was only part of his work commitment. He had started to work in private practice and hired rooms from a rheumatologist. The rheumatologist liked what Trevor was doing with the foot. The practice was in the City of London and the rheumatologist knew all the private GPs and looked after a number of the Saudi Royal Family. He started referring patients.

“I get a call and have to see a Saudi Prince who’s got the Royal Suite in Park Lane. When I see this child’s father, the Prince, I’ve got five other kids…”  In the end, he was rather busier than expected.

After being approached by another Australian podiatrist, he established a link to a runner’s shoe store. Using his knowledge he invested in his own gait analysis system with 4 CCTV cameras for split view observation. Being no faint heart he admits he loves gadgetry, especially where it can help patients.

Over the years, Trevor developed a business approach to his sports activities while maintaining a modest surgery practice. In truth, most podiatrists specialise in one area, but not Trevor. Having travelled out to the USA he started to make contacts, especially in the area of diabetes.

He was now trained in surgery and able to combine his knowledge and expertise in the area of diabetes and pressure analysis and came across a new format for evaluating foot pressure called Pedar. He used the Pedar to work with video analysis in a little room in a townhouse in the City of London paying £6 a week rent. A colleague introduced Trevor to  Brian English who became the Chief Medical Officer for UK Athletics in the early 90s. This connection led to runners being referred to Trevor’s clinic. “We’d look on the back four pages of the sports page and see if there was a page we didn’t have a patient. It was literally a who’s who  to the extent that we used to get the patients to sign the casts.” 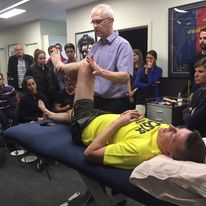 I consulted him at his London practice in 2018 to see him working with a colleague and experienced his Pedar pressure analysis system. Trevor is still engaged in sports medicine and education as well as travelling and lecturing. He helped establish a course at Queen Mary University of London,  in sports and exercise medicine at Master’s level. Working with his colleague Nat Padhiar they have blended their expertise to produce a course of merit. He explains their course is dedicated to the broader aspects of sports podiatry while others may be more biased toward biomechanics.

Trevor encapsulates the field of podiatry. “Everything we do has a degree of mechanics involved in it. Even the diabetic foot. The diabetic foot has manifestations mechanically because of the disease process as does rheumatoid, as does any foot deformity that you deal with and is based around the musculoskeletal system.  Podiatric sports medicine is about knowing the mechanics of the different sports.”

Sports podiatrists are traditionally engaged with orthoses, although the specialty has become refined with re-educating sports people following injuries and encompasses a wider understanding of the whole body rather than feet alone.

There is no doubt you cannot reach the top of any profession without trying to widen your knowledge and scope. Trevor’s ventures into industrial podiatry have been equally successful and for some years I had a brochure covering common foot products that I would share with my patients. The picture of a man with a gentle smile on the front cover was Trevor; he was an adviser to one of the major companies at the time. Few can say they have the widest range of skills from rheumatology and diabetes to surgery, embracing sports medicine and having an extensive network with medical colleagues.

Harold Prior dealing with a foot before Trevor entered podiatry

The profession of podiatry thrives because of professionals like Trevor Prior and he is one of a number who can provide a beacon for those lucky enough to come across his philosophy. One thing that could never be forgotten; the influence that Harold, the old-timer in chiropody, made on his son who made use of his father’s lack of interest in sports. Harold Prior would have been one of the proudest people had he seen the progress and contributions that his son has made to modern-day podiatry. Trevor Prior holds no airs and graces, as anyone who has met him will tell you, but his patients love him and his popularity has led him to be highly engaged with every aspect of podiatry helped by his proximity to the Royal College of Podiatrists in London.

Why not read  – Podiatry as a career choice?

The Football Stud and Soles