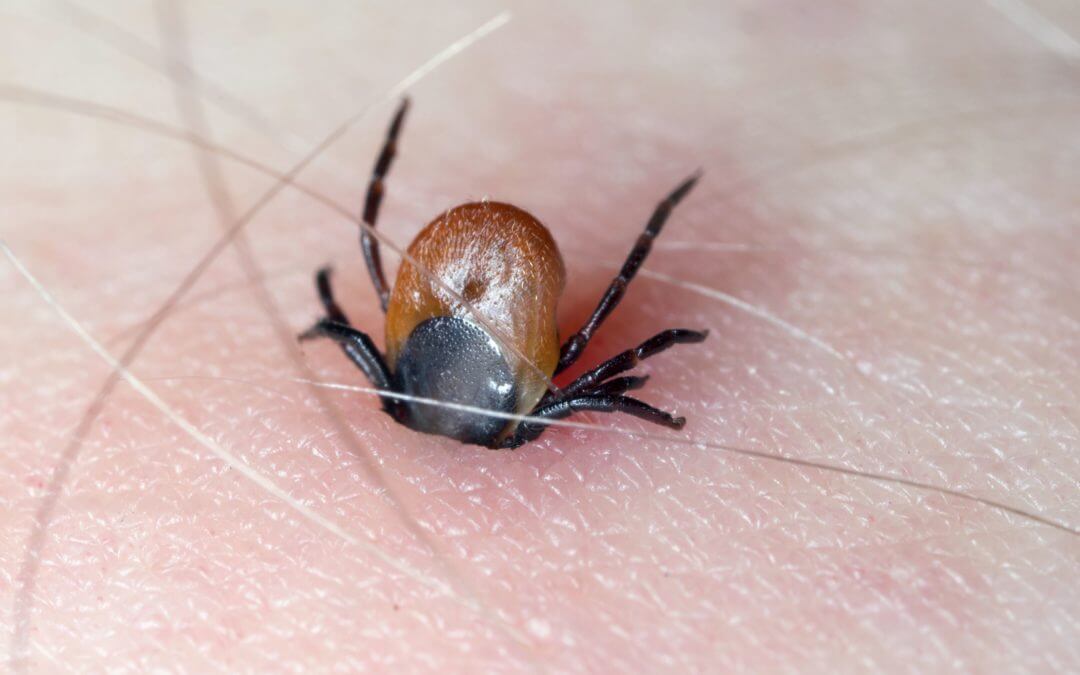 As a journalist it is easy to headline something to grab attention. The Dangers of walking in the countryside sound innocuous but then add in Lyme Disease & Ticks!

Walking is not dangerous but it has some perils for those unsuspecting groups or individuals. Take those who climb Ben Nevis or Snowdon in the wrong weather and without any protective gear or improper communication. This is pretty obvious compared to ambling through some trees or wending your way around the edge of a field.

Spring turns to summer and we head out into the fields innocently expecting to enjoy a light breeze with plenty of sun rays. Shaking off not only those winter blues but maybe a little weight. It’s just a day out isn’t it? Much has been written elsewhere on the dangers of the sun’s powerful rays, but I focus here on something a little more tangible. Let’s start with an anecdote.

‘What’s on your back?’ my wife said with some astonishment.

Unable to see the wretched problem she took an out of focus shot with her phone. Two days later I realised I could not ignore the problem as I tracked back events.

The bulbous grey object had tentacles but much of the body had disappeared below the surface of my skin, unlike the photo (left). By now we knew the problem was a tick. A chance walk near some cattle on the edge of a National Trust parkland a few days earlier had been undeniably the source. We might be familiar with ticks in animals, indeed our cat had one, but when faced with it on you, the sheer ugh factor crept in. And so the case history developed. Lying on my front on a Sunday morning several days later, the nurse simply asked,
‘Can you bear pain?’
I was unsure how to answer. I was not a complete woos but preferred a local anaesthetic maybe. Without a doctor around she sprayed what I assumed was a cryogenic alcoholic spray. This seemed to come out regularly as she wrestled with the remaining head and tentacle. My daughter (used to this problem in her dog) had kindly tried in vain to remove the nasty insect but a bit remained hastening my visit that Sunday to the minor injury unit.

The sharp painful point of the nurse’s forceps crept through regularly but I had known worse pain. After sometime she said,
‘I’m making it bleed.’
‘Bleeding – not a problem, go ahead,’ I replied.
Anything to dilute any toxins I thought. The darn thing had been in my skin now for 72 hours and the target red inflammation needed a little help.

Now protected with a dressing to soak up any additional bleeding, I rejoined the family, grateful for the NHS and reviewing the fact that I had rather greater concern that these ticks carried more than just an ugh factor!

Ticks carry disease and the one I worried about was Lyme Disease. I swallowed 2 antibiotic tablets, something I rarely do as I like to keep those special medicines for serious problems. Today was an exception and I glugged down the glass of water thankfully knowing I had protection from the deadly bacteria.

‘Now make sure you go to your doctor as you only have 7 days’ worth, and you need 21 days.’

The limited prescribing powers of the nurse meant a communique (from the Minor Injury Unit) had to travel 200 miles to my home GP. Unbeknown to me this was sent snail mail, second class, and because of the bank holiday there was no correspondence other than the 111 emergency support service who had provided advice at the start of this whole event. Their correspondence arrived the day after the holiday.

Of course up to date modern electronic communication had a significant advantage over the Royal Mail. By Friday (5 days later) and numerous telephone calls, and a visit to the GP surgery taking the antibiotic box with me, the surgery finally topped up my 14 days.Doxycycline is the antibiotic of choice given over 21 days

What is a tic, what is Lyme disease and why is it so important to take preventative action? As a foot specialist I confess that I had not seen a tic on a leg or foot. Unlike my back, the foot or leg would be more likely a location and easier to spot.

What Are Ticks OR Tics?

They are insect like and members of the spider family. They have four life cycles and are more infectious during 2 of those cycles which is a bit different from spiders. The problem is that these creatures lay eggs in their hundreds and latch onto animals including us when an opportunity arises.

Ticks are drawn to us hosts by our warmth, moisture, body odour, and even vibrations. They will latch on a term known as questing. We don’t feel the piecing as they burrow their head in because they inject an anaesthetic into the skin first. Once feasting on us they bloat so you only see a fleshy grey swollen bladder sticking out. By this time it is too late and pulling them out can leave a bit in, as in my case. As ticks don’t fly they have to wait for that moment to pounce.

Once their body has been removed you need some professional help if the head or part of it is left behind because this infectious carrying bug is not good news, you will need treatment. If left, the tick will drop off once it has fed but by that time if it does carry a bacterial infection it is too late, so prevention is better than cure.

Should we be worried?

But what about that infection. Well it is not any old infection but one caused by a spirochaete called Borrelia burgdorferi. Being a mouthful to pronounce we can translate the condition to the better known Lyme Disease. This is what the NHS has to say…

Ongoing symptoms
A few people who are diagnosed and treated for Lyme disease continue to have symptoms, like tiredness, aches and loss of energy, that can last for years. These symptoms are often compared to fibromyalgia and chronic fatigue syndrome. It’s not clear why this happens to some people and not others. This means there’s also no agreed treatment.

The bottom line as they say is don’t take chances as people can feel very unwell and have significant joint pains after infection. I was pleased to say I never had any symptoms, let alone the target shaped skin rashes. The next time I walk alongside any field with cattle, hedgerows in the summer I will be well covered and have a check afterwards. It took me three days to notice something was up!

It was good to hear from Stephanie Young, Founder & Writer ||CampingCooks.com following this article and she has added a great book about Lyme Disease to her site. This is worth having a look. https://campingcooks.com/lyme-disease-guide/