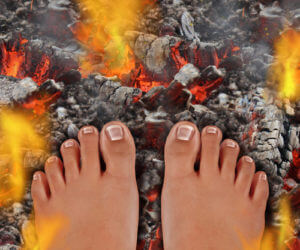 Human firewalking is defined as ‘the practice of walking barefoot over something such as hot stones or wood ashes, often as part of a traditional ceremony’and is therefore generally perceived as ‘unnatural’ or at very best, a demonstration of ‘magical’ or religious fervour. The practice has existed since before recorded time and has been widespread across the globe.  The IKung Bushmen of the Kalahari Desert use the technique as a part of their healing ceremonies whilst amongst others, clans in the Fijian Islands, girls in Bali and fakirs in India demonstrate their apparent resistance to pain by the assumption of a trance-like state followed by a walk across hot stones or fiery embers. The practice is often seen as a rite of passage, or a test of courage although there is frequently a religious connotation and may well be accompanied by the release of chemicals associated with transcendent religious experiences.

Over the past 30-40 years a number of organisations have offered firewalking as one of a range of techniques to build self-confidence in the individual and as team-building within businesses.  Some companies claim to offer such techniques as glass-walking and fire-walking as alternative health therapies and claim that ‘mind over matter’ or ‘spiritual energy’ is a required element to successfully undertake the walk, for example: Clearly, the number of perfectly respectable companies involved in team building without the benefit of being imbued with feelings of divinity, who have no ‘magical discipline’ and who do not claim to be possessed by ‘the cleansing power of the fire spirits’ tends to debunk such questionable statements! The first recorded scientific investigation in the West was carried out by Harry Price of the University of London Council for Psychical Research in 1935.  The examination of the phenomenon was carried out at Carlshalton in Surrey when Mr Kuda Bux, a Kashmiri ‘magician’ who was under examination for an unrelated ability, mentioned that he had the ability to fire-walk and was willing to demonstrate how it was done.  In this case charcoal was added to a previously prepared oak wood fire.  Unfortunately, no podiatrist was present but the feet of Kuda Bux were examined by a medical practitioner who was convinced that no form of chemical had been applied to the sole the feet which were ‘soft and dry. Bux walked across the glowing charcoal four times without any sign of pain, and when his feet were afterward examined, there was no evidence of damage.  A Mr. Digby Moynahan who also attempted the walk jumped off the charcoal after two steps demonstrated some blistering.  An extant photograph shows that Moynahan was lifting the opposite leg very high.

The Author’s Experience of firewalking

This was carried out for the charity The Mary Ann Evans Hospice and the walkers had all gained sponsorship for the event.  The only commonality of the walkers was a desire to benefit the charity and a willingness to carry out the challenge, otherwise they were drawn from various employments and many were previously unknown to each other.  The organising company ensured that a fully equipped firefighter was on hand and that the area of the fire-walk was suitably roped off from the numerous spectators.  The site of the walk was an area of grassland with ample room for movement. A thirteen feet by three feet trench was dug and filled with hard wood cuttings and chippings which were then set ablaze in the afternoon preceding the walk.  Buckets of cold water were placed about two feet away from the end of the trench where the walkers would complete their challenge.  At 7.30pm, the walkers met with the organiser who took them through a careful briefing with demonstrations which showed that, with self-confidence, seemingly impossible tasks can be carried out with aplomb.  Forms of disclaimer were signed and the walkers checked to ensure that no moisturising or other cream had been applied to the feet.

The participants were instructed to walk steadily over the coals and to plunge their feet into the cold water after completing the challenge in order to douse any cinders attaching to the feet. Towards dusk the fire, which had burned to embers, was checked; large pieces of wood were removed and the embers flattened.  Although the walkers were clearly motivated, it seemed that the spectators were more excited by the prospect of observing ‘the impossible’.  Despite the fact that dusk had fallen – which made the glowing coals all the more impressive – there was no dew apparent on the grass.  An infra-red digital thermometer was used to measure the temperature of the fire pit at 5230C (973.40F). For comparison, a domestic barbecue (used to cook beef steak and pork sausage) measured 5070C (944.60F) at the hottest portion of the burning charcoal (temperature taken on 3rd August 2011; a still, warm evening).  A recording of a piece of burned, ash covered charcoal provided a temperature of 276.70C (531.10F).  The organiser checked the fire and carried out the initial walk himself.  He was followed by the rest of the twenty walkers, none of whom refused to carry out the challenge.  Three of the walkers volunteered to have the temperature of their feet measured before and after the experience, prior to using the cold water.

Anecdotally, majority stated that their feet tingled but that they did not experience heat from the fire pit until the end of the walk. In analysing the outcomes of the fire-walk, it should be noted that the walkers, having experienced the motivational talk, and being slightly anxious, were variously affected with an ‘adrenaline rush’.  Their hearts were pumping faster with a resulting increase in blood flow to the feet. the pressure of the cooler body (the foot) on the hotter body (the coal) will result in the hotter body losing heat rapidly

Historically, the individuals carrying out fire-walks have been regarded as ‘special’, either with regard to courage or religious fervour. However, it seems that any normally fit and motivated person can successfully complete a short fire-walk without ill effects.  Motivation is the key.  The author was told by a firewalker that she suffered from two ‘phobias’.  One was fire and the other heights.  Having completed the fire-walk she intended signing the next day for a sponsored parachute jump.  Needless to say, the process is not a good subject for do-it-yourself; the proper wood must be used and health and safety demands that certain rules are adhered to.

The final word must go to Jearl Walker
Jearl Walker, who as a physicist can be forgiven for overlooking the obviously important biological element:- “I have long argued that degree-granting programmes should employ ‘fire-walking’ as a last exam.  The chairperson of the programme should wait on the far side of a bed of red-hot coals while a degree candidate is forced to walk over the coals. If the candidate’s belief in physics is strong enough that the feet are left undamaged, the chairperson hands the candidate a graduation certificate.  The test would be more revealing than traditional final exams.” Thanks are due to Mary Anne Evans Hospice and Mr Steve Stuttard of Survivorbility Ltd.

Want to read the FULL article?

This article was previously published elsewhere and permission was provided by the author to edit the material for Clinician Portal. The FULL Firewalking article can be accessed by clicking on ‘Firewalking Clin Port Article April 2019.‘ Not readable on tablets and Smart phones.

Thanks for reading ‘Human Firewalking’ by Bill Liggins